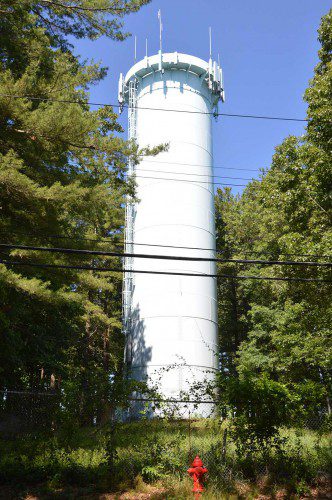 AT 114 FEET TALL, the Tower Hill Water Tank is the most visible vestige of North Reading’s original water distribution system. The tank predates the road that bears its name. (Bob Turosz Photo)

NORTH READING — Riddle: What is 114 feet tall, 28 feet wide, has stood in the middle of North Reading for 80 years and still goes to work every day despite never moving?

The North Reading Water Department is celebrating its 80th birthday this year. The legislation creating the Water Department was signed into law on Feb. 12, 1936 and construction on the water system began in the summer of 1936.

The initial water supply for North Reading was made from the Town of Wilmington, as 10 inch water main was laid down Park Street to the Town Center, then up Bow Street and Hill Street to the new water tower on what would come to be known as Tower Hill Road. The initial 1936 water system was also installed to serve portions of Chestnut Street, Haverhill Street, Elm Street, Main Street, North Street and the eastern side of Martins Pond.

The most visible vestige of the original water system is the Tower Hill water tank (this tower pre–exists Tower Hill Road – the road was named for the water tank, not vice–versa). If North Reading were to do it all over again and plan a new water system, this location would again be selected as the location of the first water tower. It is in the middle of town – both in a north–south direction and in an east–west direction, and it is one of the highest hills in town. Water towers are built on hilltops because in that way the tower does not need to be built as high to meet the pressure needs of the system.

Of course, North Reading has changed significantly in the past 80 years,and water demands have increased far beyond what anyone could have anticipated in 1936. If this water tower were to be built today, it would be significantly more than 28 feet in diameter.

The first major addition to the water distribution system took place in 1949 – with water mains extended to Marblehead Street, Central Street and the completion of the water mains on North Street and Elm Street. A second large expansion took place in 1955, followed by the construction of numerous subdivisions over a 50 year period beginning in the 1950s.

Subsequent water sources included the expansion of the Central Street wellfield, the development of the Stickney Well, the Lakeside Boulevard wells and the Route 125 well from the 1960s to the 1970s. The Stickney Well was taken out of service in the late 1970s due to the presence of a contaminant in the well, and replaced with a new well on the old railroad bed grade near the Wilmington Town line (hence, the name of the Railroad Bed wellfield). A second interconnection with Andover on Main Street was constructed in 1991, bringing the total capacity that Andover can provide to North Reading to 1.5 million gallons per day.

While wells provide a high degree of natural protection against most potential contaminants, rising health concerns over drinking water and the introduction of the federal Safe Drinking Water Act in the 1970s moved most communities toward treating water before distributing it to customers. North Reading constructed treatment facilities for the Lakeside Boulevard wells in 1980 and for the Railroad Bed wells in 1999.

Hopefully by now you have guessed the answer to the riddle – it is the Tower Hill water tank!