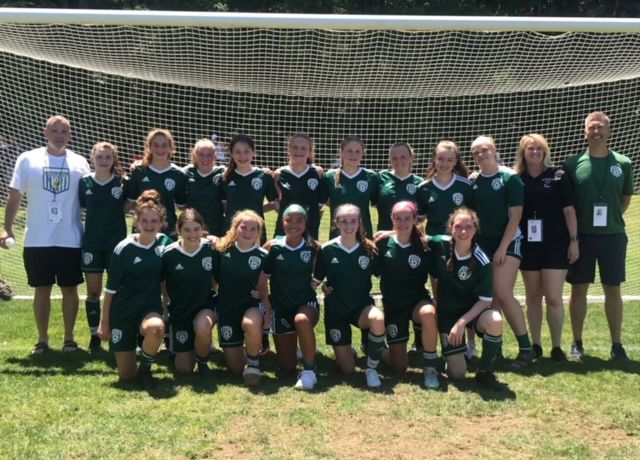 Coming off an undefeated season, Fusion was at the top of Essex County’s MTOC 1.2 Division.

At the ECYSA tournament in Pingree, Fusion beat Woburn in a tense game that ended in double OT and a shootout to secure a spot in the Finals facing an undefeated MTOC 1.1 team from Newburyport the next day.

At States, Fusion came in first place in their bracket and advanced to the Final Four, where they were edged 2-1 in a hard-fought semifinal match.

Being the first girls’ 8th grade team to win the ECYSA title, let alone advance to play in the Final Four of the Division 1 State Championship Tournament, it was an incredible achievement.

“These girls have grown up on the soccer fields together. They are a tight-knit team that consistently works hard, has developed so well over the years and has really good chemistry,” said coach Guy Tassinari. “They have come close several years to winning the ECYSA at Pingree and it was really great to see all their work come together and watch them advance so far especially in their last year before heading into high school.”

“They are all competitive players. They wanted this and they battled out there for it,” said coach Ryan Osterlind.

“What an incredible journey for these girls. I think of when they started and how they developed technically and together as a team and it’s just a great feeling to see them wrap up their youth soccer career with this accomplishment,” said coach Laura Doble.

Coaches Tassinari, Osterlind and Doble have been coaching these girls since they started playing in the NRYS program.