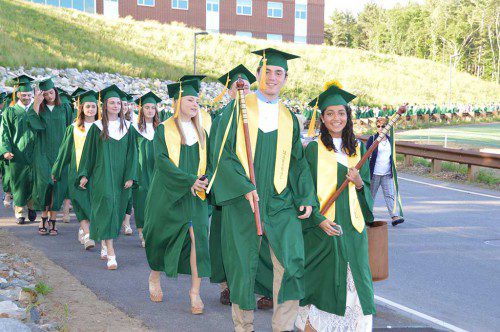 NORTH READING – With mortarboards dedicated to Winnie the Pooh, beach balls gusting across the football field and a final cry to “Free Tom Brady!” the North Reading High School Class of 2016 left the Arthur J. Kenney field with their high school diplomas and ready to write the next chapter in their lives.

“Free Tom Brady and throw those caps in the air!” exhorted Class Treasurer Patrick Riley as commencement formally ended. And in their final act in unison, that’s exactly what the graduates did.

A couple of hours earlier, up in the high school gymnasium as the graduates were primping and forming into files for the long walk down the hill to the football field, Class Advisor Rick Doucette called them all together and told them something they may not have realized.

Shortly after that, the 188 members of the class, led by the administration and the faculty made the long march (no exaggeration here) down the hill to receive their diplomas.

Recognizing the new school is still something of a work in progress, the Class Officers, President Peter Spinelli, Comeau, Secretary Elizabeth Carlson and Riley announced the Class Gift, a piece of art work to “warm up” the sterile white walls of the school to make it feel like home.

“This reflects the creative ability and potential of North Reading students that other districts wish they could compare to, but also the welcoming and caring feeling that is engraved in our school’s culture,” said Comeau.

After entering the field led by Class Marshals Nic O’Connell and Anna Tayas, the graduates had fun with the traditional barrage of beach balls during the speeches, But the Class of 2016 suffered from poor aim or perhaps it was the gusty west wind as most of the beach balls wound up rolling across the football field all the way down to the Route 62 fence – or, even worse, into the hands of the faculty.

The Class includes 91 students graduating with honors and 77 members of the National Honor Society. One of the mortarboards worn by a graduate included artwork and a quote from Winnie the Pooh: “We didn’t know we were making memories, we just knew we were having fun.”

In his traditional Charge to the graduates, Superintendent of Schools Jon Bernard noted he’s had the good fortune to know this class as their high school principal for their freshman and sophomore years and as superintendent for the last two years. “I am confident that each of you possesses the skills, attributes and attitudes to be successful in whatever path you choose but also to make a difference in the lives of others.”

For his final piece of advice, Bernard quoted Dr. Minor Myers Jr., former president of Illinois Wesleyan University: “Go forth and do well. But more importantly, go forth and do good.”

Principal AJ Loprete told the graduates they “look great in Green and Gold” and that green is the color of rebirth and new growth … highly symbolic for their commencement, which is the start of the next chapter in their lives.

“We can look to all the great qualities and characteristics that we value and encourage in society. … Authenticity is at the core of all of these. … Your true measure of success will ride on your authenticity. Authenticity must remain at the core of your actions,” Loprete said.

The three honor essayists Leah Diamantides, Jillian Comeau and Ashtyn Parker¬McDermott needed sunglasses to read their speeches but they spoke from the heart to their classmates.

“Growing old is mandatory, but growing up isn’t,” said Diamantides in her speech, which incorporated the titles of many famous Disney songs. ‘“I Won’t Say I’m in Love” with this place. But, I did learn a lot from my experiences.

“We’re so close to leaving and as much as we’ve said we were looking forward to this day, we’re all scared of what’s waiting ‘Just Around the Riverbend.’ For the ‘First Time in Forever,’ we won’t be walking through these familiar halls. In a few short months many of us will be freshmen again, but that’s the ‘Circle of Life.’ But now it’s time to celebrate, so ‘Hakuna Matata’; leave your worries behind,” Diamantides said.

Parker-McDermott said, “You can never really prepare for what life throws at you, even though you may try. You just have to roll with the punches and overcome obstacles because you will make it out alive and a better person. Never underestimate the kindness of humanity and remember our time at NRHS. These past four years will become the foundation for the rest of our lives and we have all the amazing people around us to thank for it.”

Class Essayist Veneziano said that up until now, the students have been readers but now it’s time for them to write their own stories and her speech was a metaphor on how to live their lives.

“Your story will have plot twists, good and bad. There will be mistakes and typos and errors that you can cross out but not fully erase. These will be part of your story but by no means fully define it. The best part of it all is that nobody will have the same story as you. Your story will be 100 percent unique to you and you alone.”

Presentation of the diplomas went forward in the traditional manner but with moments of special significance for School Committee Chairman Cliff Bowers and school board member Janene Imbriano.

Imbriano had the pleasure of presenting his diploma to her son Andrew and Bowers shared a special moment with his granddaughter Katie Wall as he presented her diploma.

Be sure to check out the special graduation supplement in today’s Transcript.