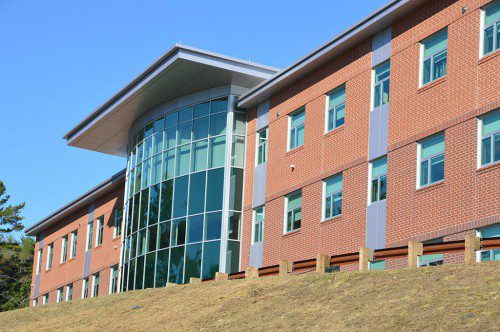 NORTH READING MIDDLE SCHOOL and High School, with its signature Distance Learning Lab shown in the center, has won the Builder of the Year Award from Gilbane Construction Co. (Bob Turosz Photo)

NORTH READING — The new North Reading High School and Middle School project has been a subject of local interest, controversy and fascination in town for over four years. Now, it’s turning heads out of town, also.

Project manager Joanna Kripp announced that the project has won the Massachusetts Builder of the Year award from the Gilbane Company and is a contender for international recognition also among buildings that were completed in 2015.

“Everyone should should be very proud of that, the design team, the School Committee and the Secondary Schools Building Committee — everyone,” said Kripp. “It’s not just how we built it, it’s what we built and how it’s functioning.

“This is a very deserving project. When you start describing this project to someone else … we’ve lived it day to day and felt the pain, but when you start describing what was built here and talk about things like the waste water treatment plant and the middle school, (which was described as a renovation but was really a deconstruction and build) and the amount of time we did all of that … it really does meet all of the criteria” for the award, she said.

“When you get out of the weeds and view it from the tree tops, it is a very impressive building. I can’t believe it was four years ago we started moving modular classrooms from one side of the building to the other. It’s a great achievement for everybody.”

Kripp said the award is given annually in memory of Iver Johnson, one of the founders of Gilbane. The award is given annually to one of Gilbane’s building projects based on a number of criteria including the size of the building, its complexity, safety, client satisfaction and sustainability. Competition can be another school building, a hospital, a courthouse, etc. “The competition is varied. It’s about the builder and the builder itself.”

NRHS won in Massachusetts and is now eligible for the international competition against all of the other buildings Gilbane completed in the past year, because Gilbane is an international company. “We’ll know in January,” she said.

The project built a new North Reading High School and deconstructed and rebuilt the Middle School. The old North Reading High School has been demolished and will be replaced with fields. The total building area of the integrated middle/high school facility is 267,939 square feet. The middle and high school are connected by a shared core, which includes the Library/media center, gymnasium, performing arts center and a central kitchen with separate cafeterias for the middle and high school students. New space also includes a distance learning lab as well as increased classrooms. The North Reading Middle and High Schools serve serve a total of 1,370 students in grades 6–12.