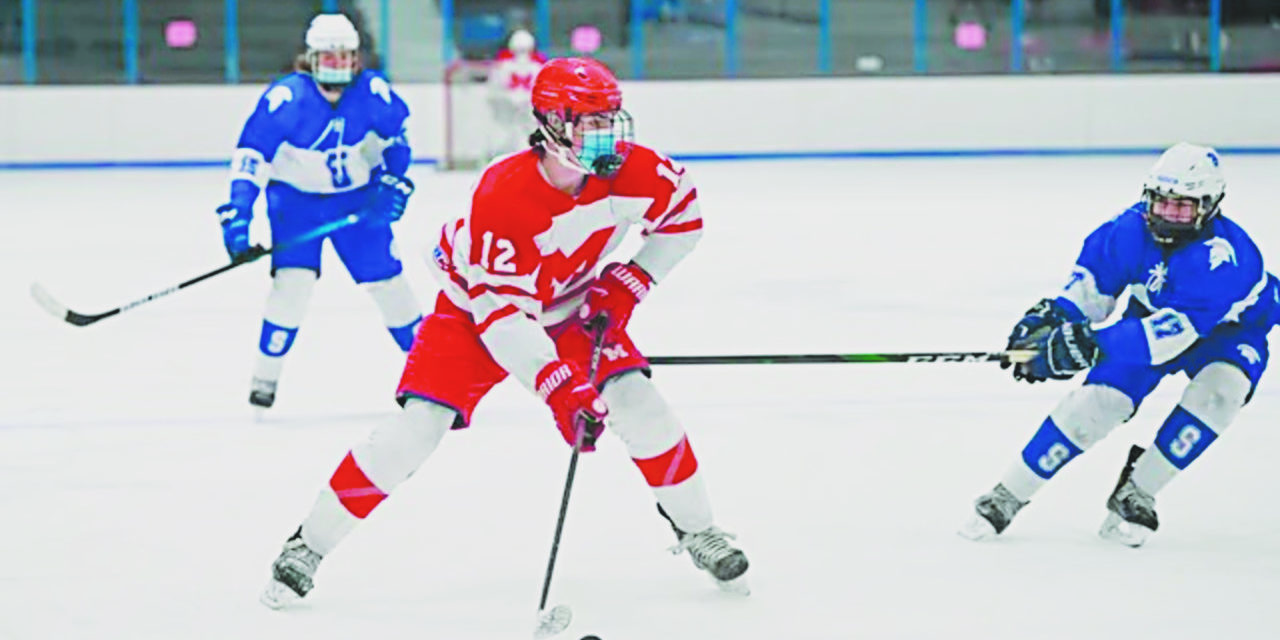 TJ SULLIVAN will lead the Red Raider hockey team, who begins their season on Wednesday against Woburn at home and will scrimmage Bishop Fenwick on Saturday. (courtesy photo)

MELROSE—It’s a changing-of-the-guard season for the reigning league champion Melrose Red Raider hockey team, who return to the 2021 winter season on Wednesday, Dec. 15 hoping to ring out 2021 with some wins.

Expect news faces to make names for themselves on this Melrose team as they fill spots that were held by strong senior talent who’ve moved on, including MHS record-breaker Brendan Fennell and other top scorers.

Fortunately, they have Melrose’s sole captain TJ Sullivan. The senior defensive forward and top player served on the Red Raiders’ first line last year and represents their only returning offensive scorer. Last season he had 6 goals and 5 assists during Melrose’s abbreviated 9 game season. He came up instrumental when the Red Raiders clinched their first-ever Freedom Division title after beating Wakefield in back-to-back games. The 6’2 forward was named a Player to Watch by the Neutral Zone in the MA High School Showcase, and it called Sullivan a Grade A “must-see forward playing for Melrose.”

Melrose coach Vin Mirasolo points to Sullivan as the foundation of their offense. Thus, expect him to guide this new team and generate much of its offense. “TJ returns essentially as our only goal and he will have a big role for us,” confirms coach Mirasolo. Sullivan will also be joined by returning starter Jason Pino, a defender who can score and is expected to be a leader on defense. A plus for Melrose is that both goalies, sophomore Joey Smith and freshman Matthew Fuccione, return to the net, which bodes well for future seasons.

Mirasolo notes, “We had fairly low numbers with 35 trying out as opposed to a team like Reading who I believe had over 90. We have to build lines as best we can.” He remains pragmatic about the team, who had a historic first when they clinched the league last season. There is a lot of learning and growing to do in a limited amount of time. Melrose starts their season on Dec. 15 against Woburn at Stoneham Arena at 8:00 p.m. “I think in about 3-4 weeks we will know really where we stand,” says Mirasolo. “There are a lot of new faces and new stuff for these players to learn, and quick.”

But it’s also a long season and Melrose has plenty of opportunities to solidify positions, find that chemistry and create an identity. One thing is for sure, it’s a welcome long season after a COVID-restricted 2020-21 that saw high school hockey cancel playoffs.

There is a sense of lost opportunity that such a talented 2020-21 team wasn’t given the season they needed to show their potential. Says Mirasolo, “It was disappointing to not be able to play last year’s team in the tournament because they would have had a nice run. They were a real contender, a fantastic class of athletes that we were sad to lose.” He adds, “But it’s a new season and we’re moving on.”