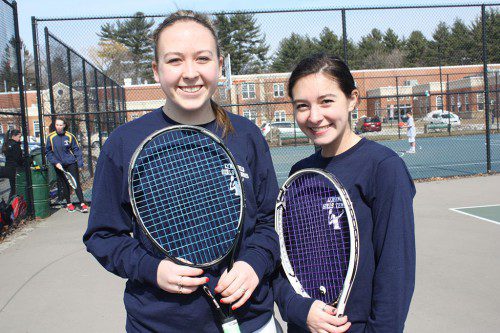 LYNNFIELD — The girls’ tennis team has made its triumphant return to the court and is looking to repeat as Division 3 state champion.

The Pioneers concluded the 2014 season with an undefeated 25-0 record. Lynnfield won the 2014 Division 3 state championship after defeating Notre Dame Academy of Worcester 4-1.

Pioneers head coach Craig Stone is thrilled the Pioneers are back on the court.

“We are very optimistic about the upcoming season,” said Stone. “We return five of our top eight players from last year, including all three singles players.”

When asked if he believes the Pioneers are well positioned to repeat as state champs, Stone commented, “We just take it one match at a time and hope that come tournament time we are playing our best tennis possible.”

The Pioneers will be led by senior captains Kelley Nevils and Izzy Figucia. Kelley, a Cape Ann League All-League player last season who finished the season with a 15-3 match record, will be playing second singles once again. Figucia, who concluded last season with an 11-2 match record, will be playing third singles and doubles.

“Both of our four-year letter winners lead by example,” said Stone. “Both continued to work on their game during the off season and both hold the success of Lynnfield tennis as a top priority with the emphasis being placed on ‘TEAM’ (Together Each Achieves More).”

The Pioneers are also welcoming back sophomore Sarah Mezini, a CAL All-League player last season who finished the year with an 18-1 match record. Mezini will be playing first singles once again.

“Sarah supplanted Kelley at first singles and had an outstanding season and was a North Sectional quarterfinalist,” said Stone.

Junior Olivia Skelley, a two-time CAL All-League first doubles player, will be playing first doubles once again. Skelley will most likely be partnered with either Figucia or sophomore Katie Nevils.

“Both Katie and Izzy have the flexibility in their game to be successful at third singles or in any of the doubles position,” said Stone. “Olivia should be the other half of the first doubles combination when decided.”

Stone said the Pioneers have yet to decide who will be playing second doubles. The players vying to succeed last year’s undefeated second doubles tandem of Logan and Sloan Colby–Nunziato are seniors Rachel Maglio, Kayla Collins and Melanie Richard, junior Amanda Stelman and sophomore Camie Foley.

“This position could be a work in progress all season,” said Stone.

The Pioneers have welcomed two promising newcomers this season in sophomores Katie Nugent and Allison Carey.

Stone said he believes the Pioneers’ “talent and depth” are the locals’ biggest strengths this season.

“We are capable of winning points at all five positions each time we play,” said Stone.

While Stone said the Pioneers’ deep rotation will be the team’s biggest strength, he said it will take some time for the new doubles players to gel.

“Team chemistry at the doubles positions will get the early attention,” said Stone. “Hopefully, the weather cooperates to allow us time on the court to accelerate that.”