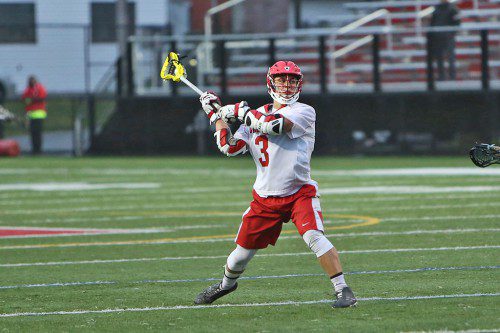 MELROSE — It was a highly anticipated rematch for the Melrose High Red Raider lacrosse team but opponent Beverly ended Melrose’s postseason on Thursday, June 4 when the #1 seeded Panthers topped No. 8 seed Melrose 10-8 in the Div. 2 North quarterfinals, just days after the Raiders beat Dracut in the opening round of play.

Facing a 4 point deficit early in the game was something Melrose ultimately couldn’t overcome. However, the Raiders (9-9) proved to be a pest that wouldn’t go away against Beverly (15-6), making it a one-goal game four times in the contest, narrowing the gap at 4-3, 6-5, 8-7 and 9-8. But a goal by Beverly’s Chris Vallette with two minutes left in the game put the Panthers up 10-8 for the final score of the game, while an expiring clock left Melrose thirsty for more scoring opportunities.

“It was actually a great game and our team played very resilient,” said Melrose head coach Matt James. “Beverly had some wrinkles in their offense in the beginning of the game but in the second half we threatened many times. I’m proud of our effort.”

Leading Melrose on offense were Mike Pedrini and Jack Mandracchia who each had three goals and one assist, and Ryan McDermott and Zac Phipps who had one goal and one assist each.

The last time Melrose and Beverly faced each other this season the result was a two point game with Beverly winning it, 14-12. Going in, Melrose knew they’d have to match goals with the Panthers. The Raiders got on board with goals from Mike Pedrini, Jack Mandracchia and Zac Phipps keeping them competitive in the first half. Melrose tied it when Corbin White forced a turnover and scored to make it 4-4 but saw the goal reversed by officials, (who argued the Beverly goalie had a foot in the crease) and it put Melrose back in a disadvantage of 4-3. “I fought that call, I was pretty upset about it,” said James. “And I think me fighting it out sparked our players a bit and we started doing good things after that.”

It was a 9-8 game when Melrose’s Jack Mandracchia scored his third goal of the game with just over six minutes to play . “Jack is a special player. He’s improved so much this year and stepped into a much needed role for us,” comments his coach. James also credits players such as Brian Wagner, Mike Pedrini, Noel Duff, Jack Wells and Matt Bowers for stepping up with the loss of senior captain Zac Mercer. “Losing Zac to injury definitely hurt,” James says. “He is above average in face offs, just a real unique player who was great in transition.”

When Beverly’s Vallette hit his fifth goal it became a 10-8 game and it kept Melrose out of grasp as the clock expired, resulting in the loss. Melrose ends their season 9-9, with a very young team that will return next season equipped with playoff experience, including their goalie and most of their attackers. For that, James is predicting great things. “I feel like next year’s team will be like last year’s team,” he says, referring to the Melrose High 2014 Middlesex League champs whose record made them #1 Div. 2 North seed. “They could even be better. They’ll be seasoned and smarter. We’re excited.”