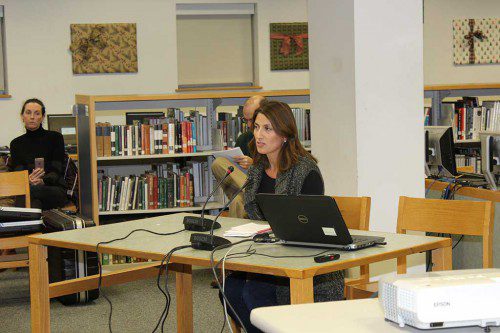 In the wake of an incident that occurred on a Metropolitan Council for Educational Opportunity (METCO) bus last month, the school department fired METCO Director Lelo Masamba and METCO bus monitor Wanda Hines.

Superintendent of Schools Jane Tremblay addressed the situation in a statement. She also acknowledged DiBiase was not at Summer Street for a period of time before resigning.

“I completely understand and appreciate the frustration that the parent community has experienced as a result of the abrupt personnel change at Summer Street School,” said Tremblay. “I want to assure the parents that there was never a leadership void at the school. (Teaching and Learning Director Kevin) Cyr and/or I were at the school during the entire process. I was extremely limited by law in what I could say about personnel matters and when I could say it. While I was unable to communicate about these personnel matters, these restrictions had no impact on ensuring our students continued to have the top quality education experience which this community has come to expect and has the right to expect.”

Tremblay continued, “in regards to inquires about student security, I can assure you that our children’s health, safety and welfare were never in jeopardy at any time during this period. I am grateful for the professionalism of the Summer Street School staff during this time of transition, and please know that every decision that is made in our district always comes back to our students’ welfare and well-being. I look forward to continuing to provide our students with the type of education which they deserve.”

While the majority of parents in attendance said they understood school officials were prohibited from discussing personnel matters, a number of parents expressed frustration about the way the personnel changes were communicated to parents.

Michelle Vaccaro, 30 Heritage Ln., said she is a METCO host parent and was notified about the two employees who are no longer employed by the school department.

“I feel like the communication between the METCO program and Summer Street has not been equal,” said Vaccaro. “I feel like there has been no explanation to these parents.”

In response to a question from Vaccaro, Tremblay said Special Services Director Kara Mauro will be serving as the METCO program’s interim director for the rest of the school year. She said Mauro, school officials and METCO families will be attending a meeting in January to “clarify what we are going to do when we move forward.”

“(Mauro) did reach out to all of the METCO host families but we did not have a complete list of those names so I know some people were left off of that list,” said Tremblay. “Moving forward, I will be working with Kara as well as the entire administrative team to make sure that we do best by all of our students whether they have a Boston address or a Lynnfield address.”

Sean Donovan said it was very frustrating TV news stations found out about the situation before parents.

“How did I find out about this on the news before I found out from the superintendent,” asked Donovan.

“The best I can say to you about that is I cannot control the news and I cannot control the fact that they were outside of Summer Street School,” said Tremblay. “That did not make myself or anybody else on the School Committee happy at all. I was still bound by not being able to communicate even given the fact they were outside of the school. I will absolutely, positively give you that made everything worse. There was nothing I could do about that. If I could have, I would have, without a question or a doubt. I have been in this district for over 30 years and I have prided myself on communicating with parents. Not being able to communicate was just as frustrating for me as it was for you because I fully understand that parents wanted answers and I was not able to give them anything.”

“What’s confusing to everybody is why could you communicate to the METCO parents but not to Summer Street?” Daigle inquired. “We are really one community and by doing that, it creates some divisiveness.”

“I understand and appreciate you are in a borderline impossible situation,” said Kelley. “I assume you are getting legal advice and assume everybody acts with good intent, but I urge you to do whatever you can to get ahead of what we are going to learn. If we continue to learn things about developments in the schools not from you, it’s going to be extremely hard for me to trust what is going on.”

“There is obviously uneasiness and skepticism from residents regarding what happened and the lack of communication,” said Curley. “What is going to be an improved communication plan going forward? There is a sense of mistrust from townspeople right now, and gaining that back will take time.”

Doyle said the situation was very unique, and “it certainly wasn’t our intent not to say anything.”

“However, the circumstances restrained us from saying something,” Doyle continued. “There was a joint effort to make sure there was no interruption in the delivery of services to students, and the primary objective was that the students continue to be educated in a safe and nurturing learning environment. We were dealt the hand that we were dealt with, and I think the staff performed. There are members on this committee who have children in that school, and speaking as one of those parents, there was no interruption in my child’s education. We have had principals out for three months and have had superintendents leave in the middle of the year. The objective is always that we continue to proceed with education and that it is not interrupted. I can assure you that when we have information, we share it. But this situation prevented us from sharing information that I know everybody wants and everybody deserves. But we couldn’t do it and it was unfortunate.”

In response to a question from a woman in the audience, Tremblay said both herself and Cyr will be at Summer Street School until an interim principal is appointed after winter break. She said a search for a new principal will begin around February.

Denise Rothwell, 33 Maplewood Rd., said Summer Street is “very lucky” to have Cyr helping out until an interim principal is found. She also said its asking “a lot” of Mauro to be tasked with serving as special services director and interim METCO director.

Tremblay said Mauro requested to be interim METCO director and said school officials will be working to assist her until a permanent director is found.

“(DiBiase) was absolutely amazing to me when she welcomed me into the special education environment at her school,” said Rothwell. “I am going to miss her and I want to thank her for everything she did for my child.”

In response to a question from Natasha Anderson, 21 Apple Hill Ln., Tremblay said she will be notifying parents about the search for a permanent principal once it begins. She also said parents from the Summer Street School Council will be involved in the search.

“I will put out what the timeline will look like and as much information as I possibly can,” said Tremblay.

“Speaking as a parent, I have the same frustrations about the communication and the timing of this communication,” said Hayman. “This has been really hard for the Summer Street community and Lynnfield as a whole. I would like to thank everyone I have talked to; all of my conversations have been thoughtful and respectful while understanding there are multiple facets going on. It was a positive sign in a real difficult situation.”