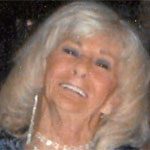 GROVELAND — Patricia A. (Henchey) Dole, 79, longtime Groveland resident, passed away peacefully on Monday, Dec. 22, 2014, surrounded by her loved ones, following a lengthy illness.

Patricia was born in Dorchester on April 28, 1935, the daughter of the late of Joseph and Catherine (Callum) Henchey. She worked for Operation Alligator in Haverhill prior to starting her business as an Avon representative. She enjoyed her Saturday night country western family.

She was the loving wife of the late George Paul Dole, who passed in 1989.

She enjoyed spending time with her family and being involved in her grandchildren’s lives. Patricia had a wonderful garden, with an array of beautiful plants she carefully tended. She lived for the sunshine, fun and surrounded herself with wonderful people.

Patricia will be greatly missed by everyone who had the pleasure of knowing her. “Her soul shines with the stars above.”