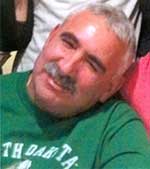 WAKEFIELD — Phillip Harris Segal, 63, of Wakefield, died Saturday, Oct. 22, after a long illness. He spent his final weeks at the Bedford VA surrounded by family and friends.

Born May 18, 1953, he grew up in Revere and lived in Winthrop, Malden and Wakefield, where he resided for the last 25 years.

He was a U.S. Army veteran with a lifelong passion for fitness and sports. He ran two gyms and coached kids in karate and football despite the multiple sclerosis that dogged him since the mid-1970s.

Even after being restricted to a wheelchair in the early 1990s, he rarely missed his daily trips to the gym. He faced the challenges life threw his way with strength, determination and humor.

He nurtured deep friendships and inspired legions of kids as a football coach for Pop Warner, Dom Savio and Malden Catholic high schools. He owned and operated Polaris Gym in Malden and Natick, and worked at the former Palace nightclub in Saugus.

He adored his family. His wife of 42 years, Laura (Agcaoili) Segal of Wakefield, was the center of his universe and he took immense pride in his children and grandchildren.

He was preceded in death by his parents, Lewis and Gloria Segal and daughter Sherry Segal.

In addition to his wife, Laura, he is survived by his children: Dennis Segal and his wife Shannon of Everett, Melanie Segal of Malden and Andrew Segal and his wife Violet of North Bergen, N.J.; his grandchildren Ashley, Dennis, Nicholas and Sebastian; his siblings, Susan and husband the late Robert Kelly of Revere, Robin Segal and her wife Denise of Lynn, and adored his many nieces and nephews.

He made so many connections over the years that he was known to run into friends everywhere he went. He’ll be remembered for an unyielding generosity and constant desire to make people happy. If a friend or family member was in trouble, he was there to help.

“He was always there for me and loved me as much as I loved him,” said one of his longtime friends, Vinnie Favorito. “My poor friend and brother went through so much but always had a ‘don’t worry about me’ attitude. He was a real man’s man — someone to look up to. He lived to help the kids in sports.”

Phillip’s funeral will be held from the McDonald Funeral Home, 19 Yale Ave., Wakefield on Friday at 9 a.m. followed by a funeral Mass in St. Florence Church, 47 Butler Ave., Wakefield at 10. Interment will be at Forest Glade Cemetery. Visitation for relatives and friends will be held at the funeral home on Thursday, 4 to 8 p.m.