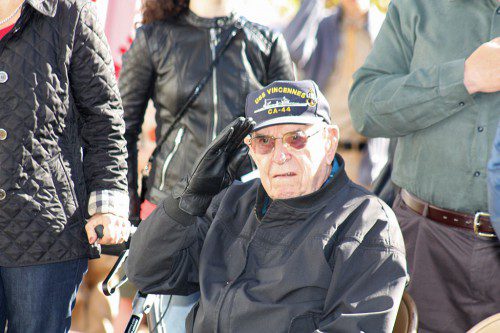 WWII U.S. NAVY veteran Earl Richard salutes as Taps was played during the town’s Veterans’ Day ceremony Tuesday. Richard, who served from 1940-46, is a proud survivor of the sinking of the USS Vincennes CA-44 in the Battle of Savo Island at Guadalcanal on Aug. 9, 1942. He swam to a life raft where he spent the night in shark infested waters while holding up a badly injured crewman until they were rescued five hours later by the USS Mugford of Marblehead.      (Maureen Doherty Photo)