Pioneer 11 kicks off drive for five 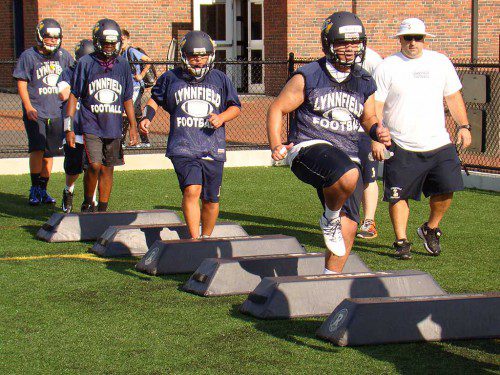 LYNNFIELD — The drive for five has begun. The Lynnfield Pioneers football team began preseason practices for the 2016 season last Friday as they prepare to capture their fifth straight Cape Ann League championship.

More than 70 players turned out for the first practice and head coach Neal Weidman will need to sort through them all to plug significant holes for the upcoming campaign. The Pioneers graduated 20 seniors last year and 19 the previous year. There will be only about a dozen seniors on this year’s squad, the smallest 12th grade group in five years. 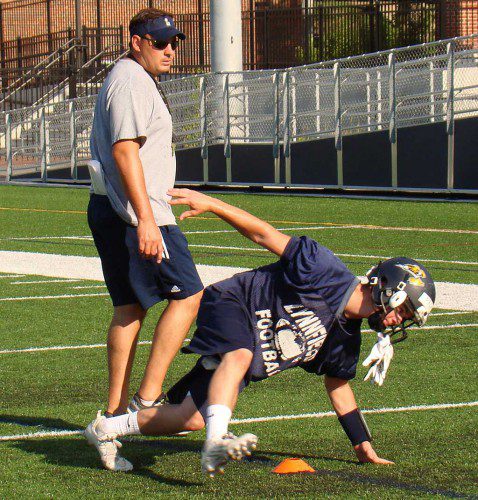 There are big cleats to fill as the Pioneers said goodbye to last year’s league MVP CJ Finn, Offensive Player of the Year Drew McCarthy and Lineman of the Year Cam DeGeorge as well as All-Leaguers Spencer Balian and Drew Balestrieri. Ten other Pioneers earned league honorable mention.

The Pioneers are coming off an 8-3 record last year including a tough opening round playoff loss to Watertown. In their four championship seasons, Lynnfield has gone 37-9. Weidman, who is beginning his ninth season as head coach, has enjoyed an impressive run of success since taking over the program in 2008. His teams have amassed a 64-27 mark for a .703 winning percentage that is tops among all Lynnfield football coaches. During his eight–year tenure, the Pioneers have captured five league titles, a division championship and earned a trip to the Super Bowl.

“We’ve been really fortunate with a bunch of good groups that came through,” Weidman said in explaining the success. “But we have a lot of work to do before we even think about a league championship at this point.”

Once again Weidman has a large pool of recruits from which to choose, led by captains Louis Ellis, Mike Stellato, Kyle Hawes and Alex Boustris who are the only returning regulars from last year. Fortunately, the number of blowout wins by Lynnfield last season enabled Weidman to play many of the younger players and their experience will come in handy as the Pioneers look to rebuild. The younger squad will definitely affect how the Pioneers prepare for the upcoming season.

“We just have to go slower than in the past,” Weidman said. “We have to do some things differently. Like today as I was signaling in the plays I had to say them out loud as well because a lot of the kids don’t know the signals yet. That hasn’t been the case for four or five years since the older kids all knew them. Being so young and having so few seniors we’re going to have to slow down so kids can pick things up. The seniors have worked hard and they’re ready for their senior year. There just aren’t a lot of them.” 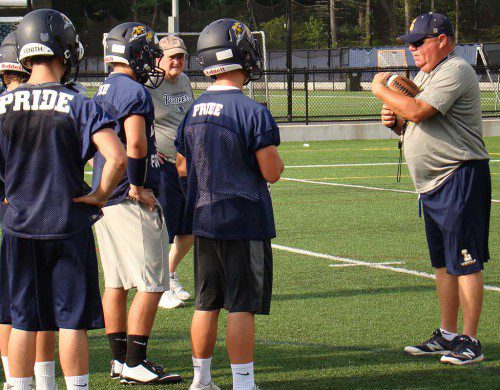 After a summer of 7 vs. 7, workouts and camps, the Pioneers are just about where Weidman felt they would be.

“We need to get more guys up to speed than we’ve had to in the past,” said Weidman. “But I like a lot of the kids. We’re just going to have to be a little more patient.”

The Pioneers will be playing in a contracted CAL Baker Division this season as Georgetown has dropped out and will be playing an independent schedule this year. That leaves Lynnfield in a five–team division with Amesbury, Ipswich, Manchester-Essex and Hamilton-Wenham.

“Georgetown is trying to do what’s best for their program and I completely understand that,” said Weidman. “As for the rest of the league, some of the teams last year were pretty young so we’re going to have some very much improved teams, including Ipswich and Manchester–Essex. Hamilton–Wenham is always an X factor and Amesbury had a large sub varsity and freshmen group last year, so it won’t be easy.”

The MIAA has reconfigured the divisions for post–season play, going from six to eight divisions with schools placed according to male enrollment in grades 9–12. The Pioneers (at 320, up from 305 in 2013), have been placed in Division 3A, which is the sixth largest division in the North. This is a drop of two divisions from last year’s D4 assignment. They go from being the second smallest school in last year’s 16-team D4 to the second largest school in this season’s new D3A. Five of the 12 schools in the division actually have higher enrollments than Lynnfield but, for placement purposes, vocational school enrollments were cut by two–thirds.

By agreement, all Boston Public Schools were placed in lower divisions, which is the reason Boston Latin was placed in this smaller division. Eight of the 12 teams will qualify for the playoffs instead of eight out of 16, which was the case last season. The Pioneers will have to qualify for the playoffs by finishing in the top eight in the division, by ranking, because the CAL has eliminated automatic qualifiers for league champs and runners–up.

The Pioneers travel to Boxford Saturday morning to take on Masconomet at 9 a.m. in the first scrimmage of the year. Next week they’ll be on the road for two additional scrimmages, the first against Salem on Tuesday, Aug. 30 at 4:30 p.m. followed by Friday, Sept. 2 against Melrose at 4 p.m.

The Pioneers open the regular season at the refurbished War Memorial Stadium in Newburyport on Friday, Sept. 9 at 7 p.m.