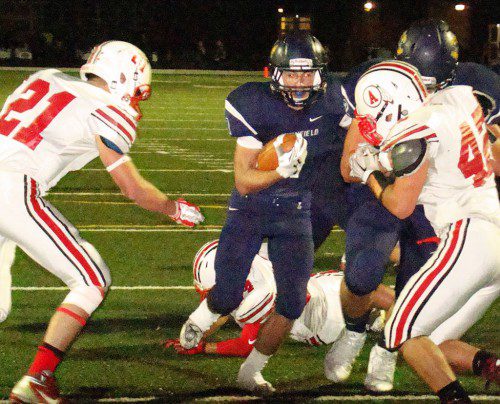 CAPT. DREW McCARTHY scores his first TD of the night against the Indians. He rushed for two TDs and scored again on a 50-yard TD pass in the victory. (Tom Condardo Photo)

LYNNFIELD — Anger is a great motivator and the Amesbury Indians found out just how big it can be last Friday night in their CAL Baker Division opening game against the Pioneers.

A clearly ticked-off Lynnfield squad, upset over a tough loss to Danvers the previous week, took it out on the Indians, throttling the visitors in a dominating 41-0 win at Pioneer Stadium.

This one was over quickly as the Pioneers scored on every possession in the first half, rolling for over 300 yards of offense and building a 34-0 lead at the break.

The defense was just as impressive, holding the Amesbury Wing T offense to 38 yards and one first down in the first two quarters. Lynnfield added another score on the first play of the second half and cruised from there to a 41-0 win. 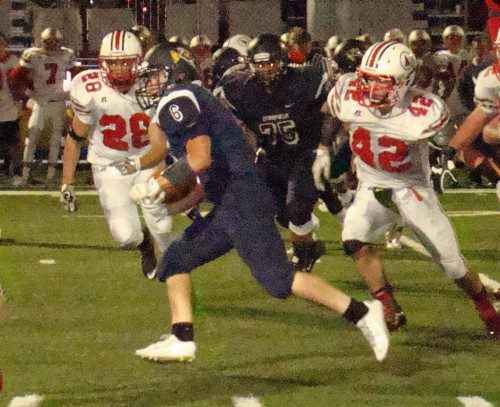 SOPHOMORE Andrew DePalma (6) glides through the Amesbury defense for a 17 yard gain in the third quarter. He capped the drive with a two-yard blast. (Tom Condardo Photo)

“They came out on a mission,” said Pioneer head coach Neal Weidman of his revved up squad. “I wasn’t sure how they would react tonight but they reacted how I hoped they would. You talk about character. Are you going to bounce back or are you just going to take it?”

Captain Drew McCarthy ignited the offensive outburst, rushing for touchdowns of three and six yards and hauling in a 50-yard TD pass up the middle from Jake McHugh. McCarthy exploded for 92 yards on 12 carries in two quarters of play.

“He wanted to have a better game than he had last week,” Weidman said of McCarthy, who managed only 46 yards rushing last week against a tough Danvers defense. “He came out hard and ran hard and fast and was much more physical.”

McHugh was surgical as well, completing nine of 10 passes for 134 yards and two TDs, all in the first half. He also ran twice for 35 yards. The senior has been impressive in his three games as a starter with a 67 percent completion rate (30/45) for 473 yards and five touchdowns.

The win was the Pioneers’ seventh straight home win and lifts them to 2-1 on the year. It was the first win in Baker League play and was the 16th straight league victory for the Pioneers.

“That’s very important,” Weidman acknowledged of winning their first league game. “The only guarantee to make the playoffs is to win your league.” 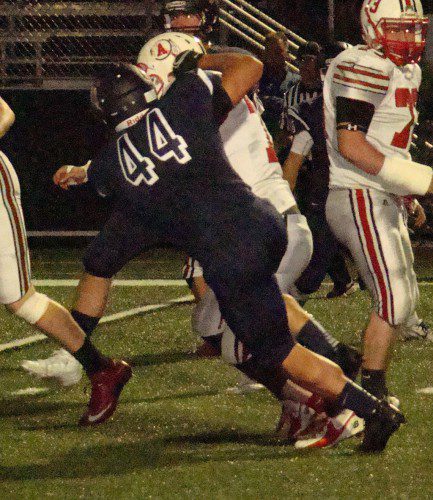 The Pioneers wasted little time knifing through the Amesbury defense, opening the game with a six-play, 59-yard drive capped by a six-yard McCarthy run. Dan Bronshvayg added the first of his five PATs to make it 7-0.

They made it 14-0 on another 59-yard drive, this one ended with a two-yard blast by captain Drew Balestrieri. The McHugh to McCarthy 50-yarder made it 21-0 early in the second. McCarthy’s three-yard run upped the lead to 28-0. A McHugh to Louis Ellis 32-yard hookup ended the first half barrage at 34-0.

Andrew DePalma capped the Lynnfield onslaught with a two-yard TD run to top off a 62-yard drive to open the second half. The sophomore carries four times for 39 yards on the march. In all, the Pioneers amassed 426 yards of offense while holding Amesbury to 102 yards, 35 of those occurred when both JV teams were on the field at the end.

With the big lead, Weidman emptied the bench and the Pioneers’ backups played the rest of the way. They held their own, playing the Amesbury varsity to a stalemate for the final two quarters.

“I thought they played very well,” Weidman said of the backup troops. “They ground it out and picked up first downs, kept the clock moving and did some good things.”

The Pioneers forced four turnovers in the game with Nick Kinnon picking off an interception and Alex Soden, Steven Vaccaro and Jack Razzaboni recovering fumbles.

The Pioneers head north for the next two weeks with the first stop in Ipswich Friday night. After losses to North Reading and Newburyport to open the season, the Tigers picked up their first win for new head coach Kevin Fressette last week with a 14-12 win on the road in Hamilton-Wenham.

Ipswich has switched from the spread offense they’ve been running to a triple option set similar to the one Saugus runs. They’re still working out the kinks on offense but their defense has been quick and aggressive. The Pioneers have won eight straight against the Tigers dating back to 2007, outscoring them 217-36.