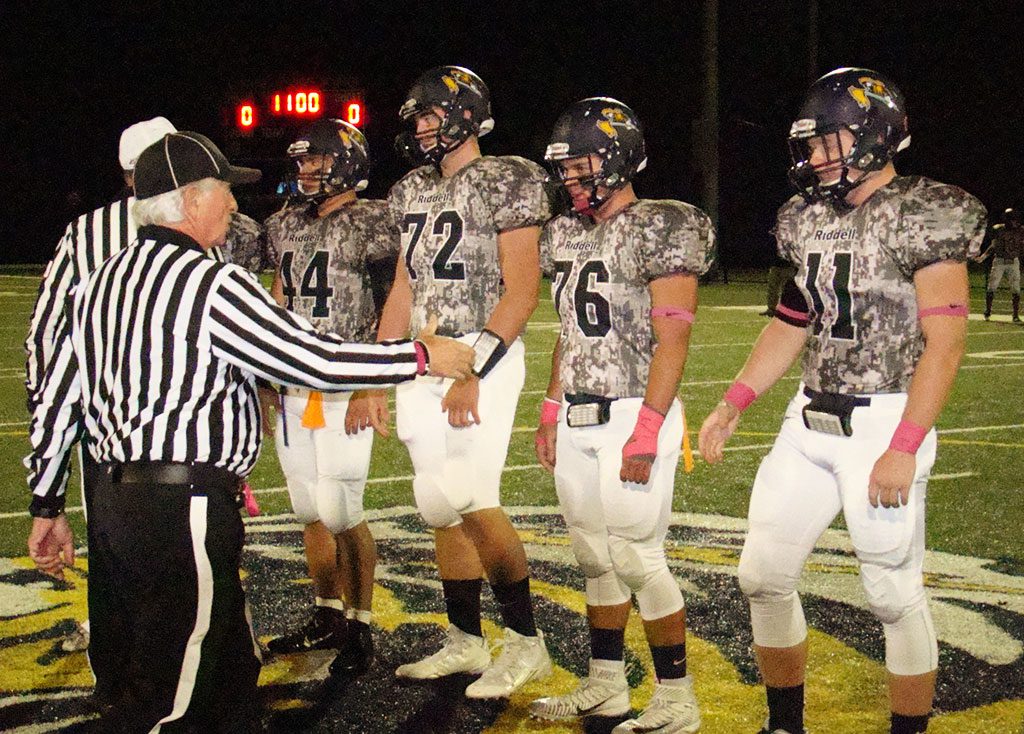 LYNNFIELD — It was a night of ceremony and celebration last Friday at Pioneer Stadium. Before the game, the team honored both the town’s military members and the memory of youth football player Benjamin “Sonny” Tropeano. Then following a 42-7 beat down of a young Georgetown team, the Pioneers celebrated their fourth straight league title, their fifth in the last seven years and the 12th overall championship in the 58-year history of the program.

“It’s great for the kids,” said Pioneer head coach Neal Weidman. “Ultimately winning the league is a nice accomplishment but they have a few other goals set too and I think they’d like to reach some of those as well.”

Clinching the Cape Ann League Baker Division championship is the first step toward reaching those goals. The win punched the Pioneers’ ticket to the playoffs, giving them a chance to repeat as Division 4 North champs and a shot at the D4 Super Bowl. 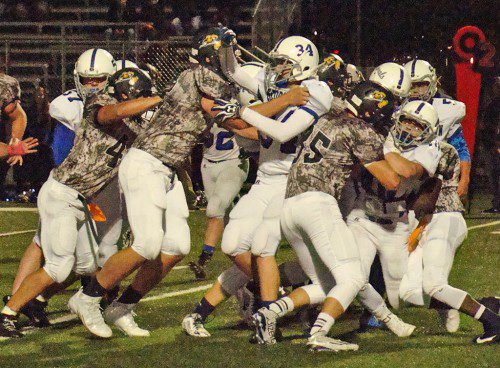 The Pioneers (4-0 league, 5-1 overall) quickly took care of business in this one, scoring four times in the first quarter against the winless Royals.

Captain Drew McCarthy, returning from an ankle injury, showed no ill effects as he scored the Pioneers’ first three touchdowns from five, four and 35 yards out on only four carries.

The Pioneers scored on five of their first 11 plays. The defense was just as efficient, smothering the Georgetown offense and holding them to 19 first-half yards and 0/11 passing.

Nick Kinnon added a 25-yard first quarter TD run and Alex Soden punched one in from the 5-yard line to make it 35-0 with just over a minute gone in the second quarter. The Pioneers ended the scoring midway in the third when Jake McHugh hit Esaie Philatrope with an 11-yard TD pass.

“I think they’re doing a good job,” Weidman said of the struggling Royals who came in with a roster of only 26 with six seniors. “They seem to know what they want to do offensively and defensively. They’re just trying to get enough players rounded up to do it.”

Georgetown literally fought to the very end, scoring on the final play of the game on a 20-yard TD pass from Jimmy Sherman to Nick Calvani to account for the final score.

“They did compete,” said Weidman. “Their kids ran hard and they weren’t going to stop until the last whistle. They were determined to score, so good for them.” 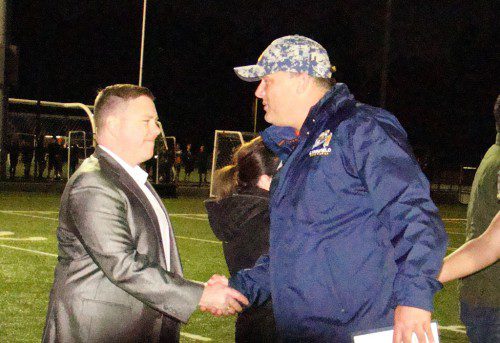 Weidman was able to empty his bench as the starters were on the sideline for the better part of three quarters.

“We got everybody in,” Weidman said. “We got them some valuable experience playing against starters from another team. Those are kids that might be on the field for us next year as starters so it was good to get them in. Toward the end we had some kids out there who hadn’t played much football in their lives.”

The win was the Pioneers’ eighth straight at home, 19th consecutive league win and the 300th win in the history of LHS football.

Prior to the game the Pioneers greeted a line of Lynnfield’s veterans and current military members as they were led on the field by a color guard from Lynnfield Boy Scout Troop 48 and a bagpipe salute from Iain Massie.

Weidman, who was inspired by the number of his former players who had entered the military, worked with the Lynnfield Pioneer Football Club parent group to secure special camouflage uniform jerseys for the Pioneers to wear during the game.

The Pioneers presented the number 55 jersey to the Tropeano family to honor the memory of Benjamin “Sonny” Tropeano, a 10-year-old Lynnfield Youth Football player who passed away suddenly this past July.

“Having a 10-year-old myself just the thought of that is terrible,” Weidman said. “I can’t imagine what the family is going through. It’s just heartbreaking.”

The Pioneers will wrap up their CAL Baker Division schedule when Hamilton-Wenham comes to town this Friday. At 2-4, the Generals will not be in the playoffs this year, so they will surely treat this as their Super Bowl.

“They are going to come ready to rock and roll,” Weidman said of the Generals. “This has become a rivalry game for us. We’ll have to strap it up and play, which is great for us heading into the playoffs.”