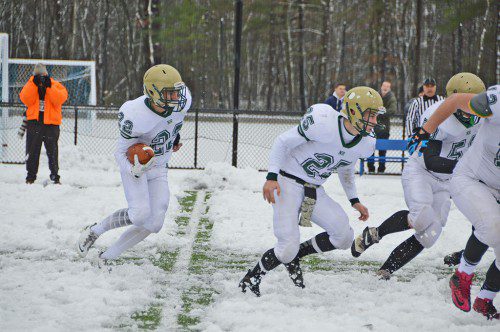 SNOW BOWL. Hornet Junior David Smith (22) hits the line behind the blocking of sophomore Matt McCarthy and others on the snow covered turf in Lynnfield on Thanksgiving morning. (Bob Turosz Photo)

LYNNFIELD — The North Reading football Hornets were dominated by their archrivals, the Lynnfield Pioneers 35–0, last Thursday morning at the new artificial turf football field at the Lynnfield High School, as the two teams met for the 56th time on Thanksgiving Day.

As far as Hornet Head Coach Jeff Wall is concerned, he hopes his returning players next year will use this game as a learning moment as well as inspiration going into the offseason.

“We have a young group of athletes and I’m hoping they are going to use this as motivation,” said Coach Wall. “The results of this game hopefully motivates them for next year’s Thanksgiving game as well.”

Lynnfield received the ball first and took advantage as it took them just five plays to score. That’s all it took for Pioneer senior quarterback Dan Sullivan to find his senior wide receiver Joe Knee for a 49 yard yard touchdown. A Danny Bronshvayg extra point was good and Lynnfield had a 7–0 lead just 1:27 into the Thanksgiving Day classic.

The play of the day for the Hornets came towards the end of the first quarter, as sophomore defensive back Matt McCarthy picked off a Sullivan pass at the North Reading 29 yard line, to foil a Lynnfield drive and limit the score to 7–0 at the time.

The Pioneers would get on the scoreboard one more time before the first half ended, but not without some controversy as Sullivan hooked up for a 30 yard pass play to Knee who took it in at the North Reading sideline, so close to the sideline that he could have been called out of bounds. The North Reading coaching staff, including Wall, was furious about the call and argued their case to the referees, who allowed the play to stand.

This reception helped set up the 18 yard touchdown from Sullivan to Knee on a fourth down and long plus an Bronshvayg extra point that gave Lynnfield a 14–0 lead with just 39 seconds left in the first half.

The game would stay like that until 5:32 left in the third quarter when  Lynnfield senior running back Kevin Lee found the end zone with a three yard run and another Bronshvayg extra point made it a 21–0 lead for the home team. 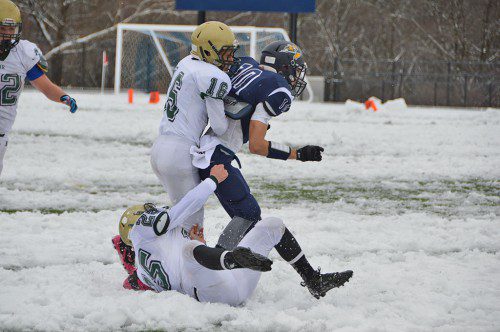 The Pioneers defense was stout and was probably helped out by the pre–Thanksgiving Day snowstorm the night before that left a couple of inches of snow on the ground. Conditions weren’t ideal for North Reading’s rushing game as only the sidelines and the important yard lines were cleared of snow, as well as the Lynnfield logo at the 50 yard line. The Hornets’ usually potent running attack was held to around 150 yards and North Reading turned the ball over four times on downs, the most in any game all season. But the conditions were the same for both teams and the North Reading coaches weren’t complaining about the field conditions after the game. Credit the Pioneer defense. North Reading ran on 48 of their 49 offensive plays and averaged just over three yards a carry. They came into Thanksgiving having scored 102 points in their previous three games but couldn’t get into the end zone at Pioneer Field.

Lynnfield would strike again before the third quarter was over as Sullivan got the hat trick, finding Bronshvayg for a 27 yard touchdown. Bronshvayg would get credit for all seven points on the play as he kicked the point after touchdown, giving his team a 28–0 lead.

Pioneers celebrate on the field

The only Pioneer touchdown of the fourth quarter came when Jake Rourke sneaked into the end zone from one yard out with 7:52 left to play. This precipitated the most bizarre moment of the contest.  With the game out of reach for North Reading at 35–0, Lynnfield celebrated with a bowling ball re–enactment in the end zone. Sullivan pretended to “bowl over” his teammates who were lined up as bowling pins and fell to the ground.

“I know some of my guys were not too happy with that celebration,” said Wall. “I hope they can also take that into the off season as motivation for next year.”

Another strange incident happened after the game was over, as Coach Wall was trying to conduct his usual post game talk with his team but could not because the Lynnfield loudspeakers were filling the air with the sounds of Bruce Springsteen and The Cars. The music blaring from the loudspeakers was so loud the players couldn’t hear Wall speak.

Wall complained to the people running the music in the Lynnfield press box but, after the talk, the music only got louder.

North Reading finished at 4–7 on the season and despite the disappointing record, the outgoing seniors who played their last game on Thanksgiving should be proud of what the program has become in their four years with the high school. This team has now become a regular threat in the Cape Ann League. Good luck to them all.