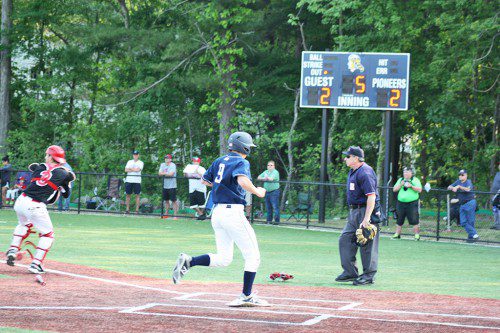 PLANTING his foot squarely on home plate, pinch runner Andrew Robins scores what would prove to be the game-winning run against Saugus after being driven home on a Tom Anastasi RBI in the bottom of the fifth to break a 2-2 tie. (Maureen Doherty Photo)

LYNNFIELD — In a seasons of ups and downs for a young ball club, the Pioneers have peaked at just the right time.

Seeded 20th out of 21 teams in the Division 3 North bracket at 9-11, in the past week the Pioneers succeeded in knocking out their first three opponents in tournament play, breaking .500 again while earning the opportunity to face the No. 1 seed in the semifinal round.

Lynnfield prevailed 1-0 over Boston Latin Academy (12-8) in the preliminary round against the No. 8 seeded team last Wednesday.

The very next day, the team produced another shutout, taking down Weston, the third seeded team, 3-0, in the first round. In the process, Lynnfield earned a home field advantage for Monday’s quarterfinal round game against Saugus (21st seed) after the Sachems had pulled off a Cinderella story of their own by defeating the fifth seeded team, Shawsheen, 7-1.

In a team-wide effort that drew upon every player’s strengths, the Pioneers broke free from a 2-2 tie after four innings of play to pull off a 5-2 win over Saugus while improving their overall record to 12-11. 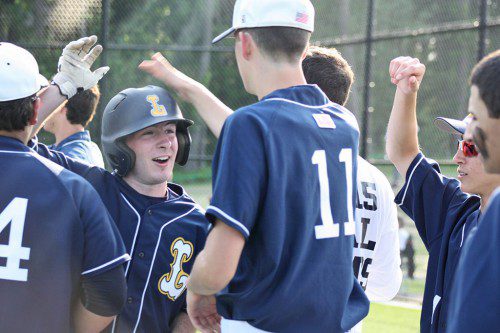 THE PLAYMAKER. Tom Anastasi is all smiles as he celebrates with his teammates after his game-winning RBI followed by scoring the fourth run in the 5-2 North sectional quarterfinal victory over Saugus Monday. (Maureen Doherty Photo)

This time, they will face Austin Prep of Reading, the No. 1 seeded team in the Division 3 North bracket. Austin (17-3) defeated both Hamilton-Wenham, 4-1, and Swampscott, 2-1, it its first two games, improving to 19-3 to advance to the semifinals.

The North semifinals will be played at a neutral site, Fraser Field in Lynn, at 4 p.m. on Wednesday, June 10.

The winner of this game will face the winner of the Whittier Tech versus St. Mary’s of Lynn semifinal matchup for the Division 3 North Championship title game, likely to be played over the weekend.

The semifinal between Whittier and St. Mary’s will be played immediately after the Lynnfield versus Austin game at Fraser Field.

Senior captain Nick Pascucci was hot on the mound, throwing a complete game against Saugus with a pitch count of 110. In seven innings, he struck out four, including the stunned final batter who was caught looking. He also walked four, scattered five hits and gave up two earned runs.

Playing second base, junior Tom Anastasi had an incredible game as well, making key plays in the field and at the plate. In the top of the fifth, Lynnfield retired the side in order. After Pascucci struck out the first batter, and walked the second, Anastasi turned a perfect double play, tagging out the base runner and tossing the ball to captain Spencer Balian at first to end the the first half of the inning.

In the bottom half of the inning, Anastasi’s RBI single drove in what ultimately would be the game-winning run as pinch runner Andrew Robins tore up the base paths to cross home plate and break the 2-2 stalemate.

Later in the same inning, Anastasi hustled home to score Lynnfield’s fourth run while Bryant Dana scored the fifth and final run in that inning as the Pioneers took a 5-2 lead and held on to it tightly.

Coach John O’Brien gave credit to his entire crew for this victory as well as the other victories up to this point as everyone has contributed. “At one time or another every kid here has made the play that ended up being the game-winner,” O’Brien said.

“Anastasi played a great game at second base. He’s got a heart of steel. Whatever we ask him to do he does – get the bunt down, make the double play, hit and run, steal a base. He actually did some pitching for us early on until we got the rest of our pitching straightened out,” O’Brien said.

The coach was glad to see the double play pan out because the team missed an opportunity to turn a similar play earlier in the game. But rather than get down on themselves, this coachable team “made the necessary adjustments” recommended by the coaching staff and took full advantage of it at the next opportunity, he said.

After the double play was made successfully, O’Brien said Anastasi “smiled from ear to ear after he came in. He’s a coachable kid. This is a good group of kids.”

O’Brien said captain and catcher Dan O’Leary also played a “huge” part in the victory over Saugus. One such turning point in this game came at the plate in the top of fourth when Saugus was denied a scoring opportunity due to the perfect relays executed from Bryant Dana in the outfield to Mike Stellato at third to O’Leary at the plate. These are plays that are stressed repeatedly in practice by the staff and that practice paid dividends.

Pascucci also pitched a complete game winner against Boston Latin Academy on June 3, striking out nine while giving up just one hit and walking six in the 1-0 preliminary round win. Boston Latin held the Pioneers to just three hits while Balian scored the only run of the game needed to put this one away.

Junior Nick Colucci earned the 3-0 victory over Weston in the first round game. He pitched a complete game, striking out 10 batters along the way and giving up just four hits and two walks but no earned runs.

Tournament bracket updates can be found at www.MIAA.net.