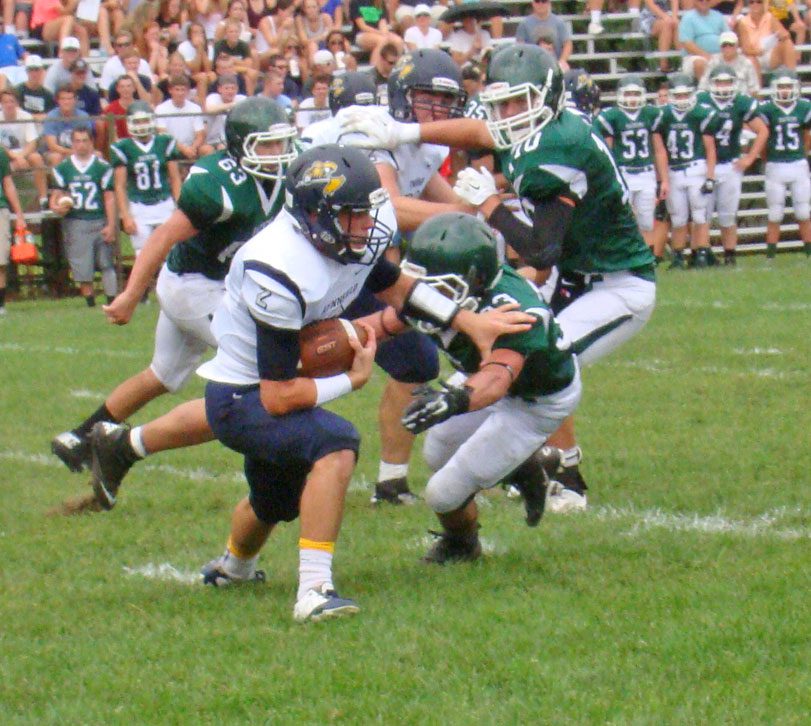 WEST NEWBURY — As Lynnfield and Pentucket battled each other last Saturday on a nearly literal gridiron in the opening game of 2014, a third opponent intruded. Playing in sauna-like conditions in West Newbury, the two squads were attacked by withering heat and humidity.

The Pioneers did the better job of withstanding the 90-plus degree temperatures and ultimately wore down the Sachems in an impressive 28-7 opening day victory.

The searing heat could have worked against the clearly bigger Pioneers, but it was another Lynnfield advantage – depth – that proved decisive. Head Coach Neal Weidman was able to attack the younger, smaller Sachems with a rotating wave of Pioneer replacements in an effort to stay fresh.

“Luckily for us, we’ve had a pretty solid two deep the whole camp,” he said. “They’ve gotten almost equal reps so that’s been key. It’s nice when you can run guys in and have the confidence that they can get it done.”

Pentucket took the biggest heat-related blow when the team lost four-year starter, running back/defensive back, and captain Jeff Porter late in the first half. He was seen leaving the field covered with ice bags and did not return. Up to that point, Porter had led the Sachems attack. He caught a 35-yard TD pass from sophomore quarterback Pat Freiermuth on the first play of the second quarter and added the extra point to give the Sachems a 7-0 lead.

“That was a big factor for them,” Weidman said. “He’s been a four-year starter on some really good teams. He was going to get the bulk of the carries.”

The Pioneers dominated from the start but couldn’t finish off some early chances. An illegal block penalty nullified a 55-yard TD punt return by captain Cam Rondeau and Pioneer drives stalled at Pentucket’s 19-yard and three-yard lines. That changed midway in the second when Ricky Johnson picked off a Freiermuth pass at midfield and returned it to the Sachem 26-yard line. Two plays later, a Sachem defender bit on a fake bubble screen, allowing captain Danny Sullivan to hit a wide open Rob Debonis for 36-yard TD pass. Dan Bronshvayg added the first of his four PATs to knot the score at 7-7.

“(Pentucket) was getting tighter and closer,” said Weidman of the touchdown. “We thought if we completed a couple of those screens we might have a shot at that and luckily we did.”

With less than three minutes left in the first half, the Pioneers forced a three and out and got the ball back on their own 48. Six plays later Jake Rourke, with a pushing assist from lineman Brandon Troisi, bulldozed over six Pentucket defenders for a nine-yard TD to put the Pioneers in front for good at 14-7.

There were some anxious moments for the visitors when the Sachems opened the second half with a methodical 15-play, 71-yard, nine-minute drive. But David Adams, who has been named the fourth Pioneer captain, ended the threat on the Pentucket four-yard line when he pounced on a fumbled exchange on the snap on fourth and goal.

Two plays later, the Pioneers cashed in on the turnover when Sullivan hit captain Jonny Knee at the 40-yard line. Knee broke a tackle and motored the rest of the way for a 90-yard TD that put the Pioneers up 21-7. The touchdown was the 1300th in LHS history.

The Pioneers sewed it up on their only other drive of the second half. The 60-yard march featured junior speedster Drew McCarthy carrying seven times for 42 yards, including the final one-yard TD.

Weidman singled out his offensive and defensive lines for their effort in the brutal conditions.

“It was hot out there,” Weidman said. “Kids like Stephen White, Cam DeGeorge and Al MacLachlan played both ways, sucked it up, and made enough blocks and tackles to get it done. They were tired.”

Also battling it out in the trenches were linemen Adams, Troisi, Spencer Balian (who recovered a fumble), Trevor Caswell, Brenden Rothwell and Eddison McIntosh.

“I was concerned going into the game that we were a little sloppy,” Weidman said. “But after scouting (Friday night) I realized it’s kind of where everyone is the first game of the year.”

The Pioneers travel to Newburyport for the Clippers’ season opener on Friday night. The Clippers finished second in the CAL Kinney division last year and fell to Bedford in the Division 4 North quarterfinals. The Pioneers have lost 13 straight at War Memorial Stadium and have not come home from there with a win since 1986.

“They’ll challenge you, get up in your face and they’ll be edgy and good,” said Weidman. “We’ll have to be ready to play them.”