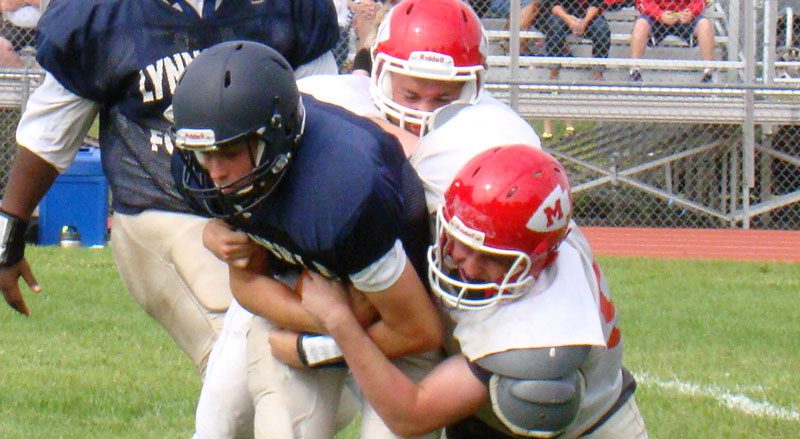 LYNNFIELD — The Lynnfield football team avoided the typical grueling opening dog days of practice thanks to last week’s unseasonably cool August weather. Unfortunately the Pioneers weren’t able to elude a pesky injury bug that took a bite out of the squad as they completed their first week of the 2014 season. The Pioneers needed the depth provided by a roster of over 70 players when they took on Masconomet in a scrimmage in Topsfield last Saturday morning.

“At least we have kids who actually know what they’re doing and can play the positions that we can put in,” said Weidman of replacing the walking wounded. “In the past, if we lost someone, we just had to put a body out there.”

The Pioneers who made it onto the field acquitted themselves well, playing the Division 3 Northeast playoff semi-finalist Chieftains evenly when the varsity units were on the field. The Pioneers recovered from a shaky start, which saw Masco score on its first two sets of 10 plays and stifle the Pioneers’ offense on its first offensive 10-play set.

Lynnfield bounced back to score twice in their next 10-play set, however. Captains Dan Sullivan and Cam Rondeau connected on a 37-yard TD pass. Four plays later Rondeau scored again, this time on a four-yard run receiver sweep, which was set up by a 43-yard bomb from Sullivan to captain Jon Knee.

With McHugh unavailable, sophomore quarterback Louis Ellis stepped up to lead the second unit, connecting with Daniel Bronshvayg for a 24-yard TD pass. Freshman quarterback Nick Kinnon came on to toss a 35-yard TD pass to Dan Jameson. Sullivan and Knee capped the scoring with a 10-yard strike on a goal line series.

“It’s always a good scrimmage against them,” Weidman said of the tussle with Masco. “We missed some golden opportunities on our first 10 offensive plays, but we competed well.

“We definitely are a work in progress,” he continued. “We have some work to do. We have a lot of moving parts right now that we want to get more finalized.”

Weidman is most pleased with the attitude of his squad.

“We have a lot of kids that want to be here and have a good season,” he said. “If we have that kind of attitude, we have a good chance with all the other things.”

As the Villager went to press Tuesday the Pioneers were scrimmaging Salem. They finish up the preseason with their traditional scrimmage against Northeast Metro Tech on Friday, Aug. 29 at 4 p.m. in Wakefield. The Pioneers then need to quickly jump into regular season mode to get ready for their non-league season opener against Pentucket on Saturday, September 6 at 1 p.m. in West Newbury.