Pioneers slog to 21-14 win over Amesbury 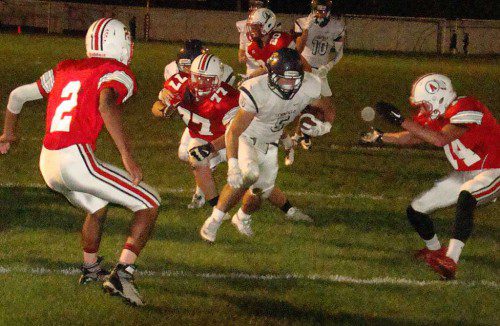 PAYDIRT. Junior Anthony Murphy (5) cruises into the end zone thanks to a huge hole opened by the Pioneers’ offensive line. The score gave Lynnfield a 14-0 lead over Amesbury. (Tom Condardo Photo)

AMESBURY — With raindrops and injured Pioneers falling all over Amesbury’s Landry Stadium last Friday night, a wounded Lynnfield football squad held off a furious Indian finish to slip away with their first win of the season.

Peter Look’s interception in the end zone with 23 seconds left preserved a 21-14 Pioneer win, their first league win of the year, their 21st CAL victory in a row and their ninth straight win over Amesbury.

“We were scraping it together with some young guys but that’s football,” said a drenched Pioneer head coach Neal Weidman following the game. “Between all the guys that were already out plus the guys that couldn’t finish the game, we were holding on by a thread.”

The winless Indians (0-3) took full advantage of the decimated Pioneers, climbing out of a 21-6 hole to put the game in doubt until Look emerged from a tangle of red and white with the intercepted football at the end.

Nursing a 21-14 lead with three minutes to play, captain Mike Stellato pinned the Indians at their own 5–yard line with a booming punt leaving the Indians 95 yards to go to tie the game. They came up one pass completion short.

With only one time out left, the Indians were forced to rely on sophomore quarterback Blake Bennett, who had been only 1 for 6 with an interception to that point. He hit two big passes for 14 and 23 yards sandwiched around a 15-yard Pioneer facemask penalty to get a first and 10 from the Lynnfield 11. A delay of game pushed Amesbury back five yards and, on the next play, Look’s heroics ended the threat.

The Pioneers got off to a fast start when on the second play of the game, Ellis swept around the right side of the Amesbury line and strip-sacked Bennett. Murphy pounced on the fumble and the Pioneers were in business at the Amesbury 27.

On the next play, quarterback Matt Mortellite (12 for 18, 147 yards, 2 TDs) flipped a bubble screen to Jason Ndansi who motored into the end zone behind great blocks from Look and Kinnon. Freshman Liam Fabbri knocked through the first of three PATs and the Pioneers led 7-0 less than a minute into the game.

Amesbury looked to answer on their next drive by getting to the Pioneer 8–yard line where the Lynnfield defense held on two straight plays to force a turnover on downs.

Fourteen plays and 92 yards later, the offensive line of Stellato, Huynh, Ken Babine, Harry Collins and Nick Contardo ripped open a gaping hole and Murphy cruised into the end zone from the 5 to make it 14-0. The junior was a bulldozer on the drive, carrying five times for 39 yards. Kinnon exploded for 26 yards on a jet sweep on the march.

The Indians got on the board before the half on a six–yard run by Zach Prentiss. The Pioneers blocked the PAT but the lead was cut to 14–6. Amesbury threatened again with less than a minute to play but Look picked off Bennett at the 24–yard line to preserve the Pioneers’ lead.

The Pioneers stretched it to 21-6 on a 41–yard pass from Mortellite to captain Kyle Hawes midway in the third but that was it for offense from the diminished Pioneers. Lynnfield got a recovered onside kick from Nathan Drislane on the following kick but couldn’t convert it into anything. Meanwhile, Amesbury took control behind Prentiss who gashed the Pioneer defense for 161 yards, 114 in the second half.

Early in the fourth, Bennett found Cameron Leary with a 14–yard TD strike and Prentiss broke in for the two to set up the last minute drama.

“We’ll take it,” Weidman said. “Just getting that first win in general is very important. We’ll have to get some troops back to win the next few. Not sure how bad the injuries are. I’m hoping they’re not too bad.”

The Pioneers will need to be at or near full strength this week when they return home to face resurgent Ipswich. The Tigers are also 1-2 but have had a tough three games to start the season. They lost 21-13 to a strong North Reading team and beat Newburyport 12-6 in a defensive battle. Last week the powerful Triton Vikings shut them out 28-0.

Ipswich is coming off one of its best seasons in a decade, finishing a game back from the Pioneers in the CAL Baker race. The Tigers earned a playoff berth and posted a winning record for the first time in years. They graduated only five seniors so the team returns basically intact.

Charlie Gillis, who shined as a sophomore two years ago but lost all of his junior year with a separated shoulder, returns to lead a strong running game. The Tigers don’t have imposing size but do rely on speed and quickness both in the line and at the skill positions.

The Pioneers have beaten the Tigers nine straight times. Game time at Pioneer Stadium is 7 p.m.