Shut out for the first time since 2008 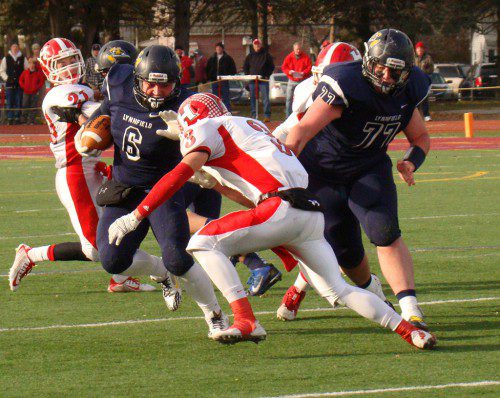 LOWELL — The Lynnfield football state championship express hit a massive speed bump last Saturday at Cawley Stadium in Lowell – with an emphasis on the word “speed.”

The Pioneers’ trip to Gillette Stadium was abruptly cancelled by a quick, athletic Holliston team that stymied the Division 4 North champs on both sides of the ball.

The undefeated Panthers (11-0) handed the Pioneers their first loss of the season with a 26-0 whitewashing, ending their exciting playoff run one step shy of a state title game.

“We knew they had a ton of team speed going in, but we thought a couple of things we might be able to do would work,” said a disheartened Pioneer head coach Neal Weidman. “We were chasing it the whole game. We were never in a favorable position to get any of our matchups because they were so fast. Their overall team speed was the deciding factor.”

The buzz going in surrounded the Panthers’ explosive offensive against the Pioneers’ stingy defense, but it was the Holliston defense that carried the day, shutting down an equally flammable Lynnfield offense.

The Pioneers came in averaging 363 total yards a game – 216 rushing and 147 passing – but the Panthers held them to 84 yards on the ground and 95 through the air for a season low total of 179. The Pioneers never threatened to score and ran off only three plays inside the Holliston 40 the entire game.

“They did exactly what they do,” Weidman said of the swarming Panthers’ defense. “They spill everything to the outside and try to get you running sideways and use their team speed to stop you, which is what they did today.”

Meanwhile the Pioneers’ defense struggled to slow down Holliston, although they held them to their lowest point total of the year. The Panthers rolled for 296 yards on the ground and 36 in the air for 332 total yards. They led the Pioneers in first downs (20-9) and time of possession (25:24-18:36).

The two teams battled to a scoreless first period, but Holliston broke the ice on the first play of the second quarter on a five-yard run by Nick Athy to go up 7-0. They mounted another scoring drive midway in the second as Holliston’s Joe Bellomo plowed in from the three to make it 14-0.

The Pioneers’ only threat came late in the half on a trick play where quarterback captain Danny Sullivan threw a bubble screen to captain Cam Rondeau who then lateralled to captain center David Adams who rumbled for a 30- yard gain to the Panther 39. Sullivan then found Rondeau for an 18-yard gain to the Panther 21. A Hail Mary attempt went incomplete on the final play of the half.

“We just couldn’t get anything else going,” Weidman said of the hook and lateral play. 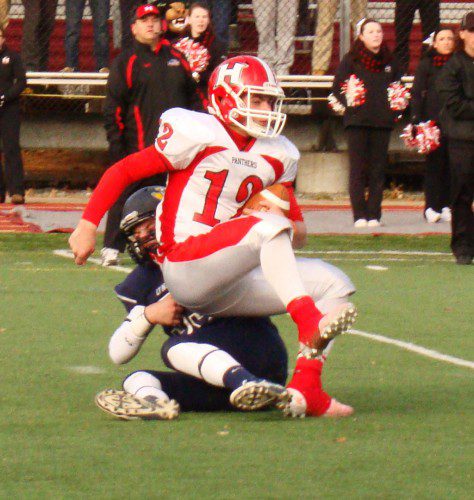 The Pioneers came out in their power running game to start the second half but stalled at the Holliston 49. Holliston’s Zac Elkinson then returned the punt back to midfield, Athy ripped off a 49-yard run to get inside the five and finished it two plays later to give the Panthers a 20-0 lead. A three and out on their next possession forced the Pioneers to punt. A high snap led to a scramble punt, which ended up yielding one yard. Holliston made it 26-0 three plays later on Athy’s third TD of the day.

The Pioneers mounted one last drive that ended in an interception as time expired in the third quarter. Holliston kept the ball for the entire fourth quarter, marching to the Lynnfield four-yard line in their double wing “war package” where they took a pair of kneel downs to end the game.

“There’s a lot of positives for the year,” Weidman replied when told the year still had to be rated a success. “We won the North and won our first 10 games and no (Lynnfield) team has ever done that. But the kids wanted more than that. It just was not our day today. Not at all. Sometimes, that’s the way it is.”

After the loss the Pioneers had four days to regroup and get ready for their annual Thanksgiving Day battle with North Reading on Thursday at 10 a.m. at Pioneer Stadium. (See separate story.)