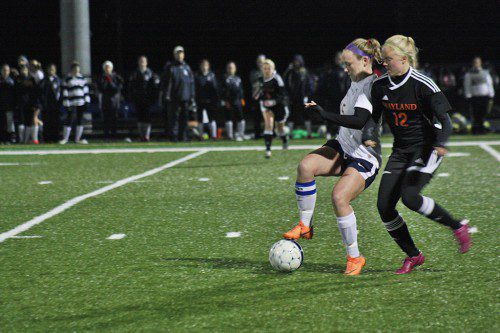 SENIOR CAPTAIN Paige MacEachern (15) fights for position against a Wayland defender during the Pioneers’ 2-0 victory over the Warriors in the first round of the Division 3 North state tournament. (Dan Tomasello Photo)

“It feels great,” said Pioneers head coach Mark Vermont. “Wayland is a strong Dual County League team. It was a great battle out there and we played well. We moved the ball well and controlled the game.”

The Pioneers (13-4-2) controlled the tempo of the game from start to finish and maintained possession for the majority of the contest.

With the game deadlocked at zero, sophomore forward Liz Reed was awarded a corner kick at 25:58 into the first half. Reed buried a shot in the upper left corner of the net, giving the Pioneers an early 1-0 lead.

The Pioneers maintained the pressure on the Warriors. After the locals were awarded another corner kick, Reed completed a kick that ricocheted to junior defender Kelly Look, who slid it past Wayland’s keeper.

“We have worked on our corner kicks,” said Vermont. “Kelly is a big target for us.”

Lynnfield maintained its offensive and defensive pressure throughout the first half, enabling the Pioneers to take a 2-0 lead at the break.

The Pioneers kept rolling during the second half, and repeatedly stopped Wayland from rallying from the two-goal deficit. Lynnfield had a couple more scoring chances, but the locals were unable to find the back of the net a third time.

Vermont praised his squad’s performance against a tough Wayland squad.

The Pioneers will host Weston on Wednesday, Nov. 5, beginning at 2 p.m. at Pioneer Stadium.

“Weston won their league and just defeated Whittier Tech 6-1 in the first round,” said Vermont. “They are a strong and fast Dual County League team.”