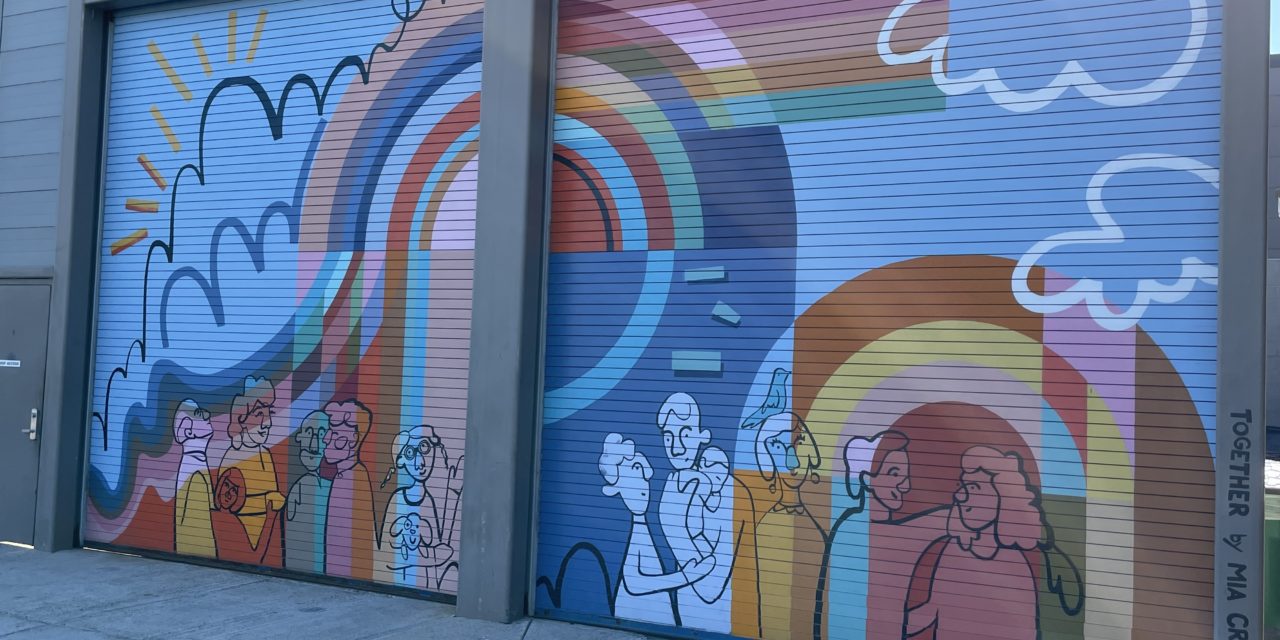 LYNNFIELD — The Planning Board is looking to enforce MarketStreet Lynnfield’s design standards when it comes to public art displays.

Over the last several months, MarketStreet has been placing public art displays around the outdoor mall. The modern artwork has been painted on the backs of buildings and sidewalks, a number of which feature New York artist Brandon Sine’s character Frank Ape. There have also been sandwich boards placed around MarketStreet that give an overview of Frank Ape.

“Frank, a mystical ape all colors at once,” reads one sandwich board. “More than just me, Frank’s you and Frank’s us. Frank means helping out someone in need, and rocking out to your own song’s beat. Frank is writing your name on the wall. Frank is for everyone big and small.”

While the Planning Board does not oppose the artwork and Frank Ape’s inclusive message, the board has concerns about whether the artwork’s style complies with the Planned Village Development District’s design standards that governs MarketStreet.

After MarketStreet art was discussed at a June meeting, Planning Board member Page Wilkins reviewed the design standards for MarketStreet to see if the artwork was in compliance with the rules.

“The design standards talk about sidewalks, facades, signs and what is not allowed,” said Wilkins during the Planning Board’s July meeting. “They are very detailed and contemplated everything except art.”

Planning Board Chair Brian Charville recalled that the board previously requested Planning and Conservation Director Emilie Cademartori and her staff to review changes to tenant facades. He said MarketStreet was previously paying architect Walter Adams to undertake the reviews.

Cademartori said the Planning Board agreed to MarketStreet’s request in order to allow new tenants to open sooner than later.

“It was taking the architect six to eight weeks to review the facades, and he was still charging MarketStreet $3,000 to do the work,” said Cademartori. “MarketStreet wanted to facilitate the process because they were trying to keep the spaces full and didn’t want to see empty store fronts.”

In the wake of MarketStreet’s request, Cademartori created a checklist that was similar to the one Adams used.

“The leasing office will receive the tenant’s package, and they will go through the checklist,” said Cademartori. “They will go back-and-forth with the tenant as many times as necessary to make sure the facades are in compliance. They will then give it to me, and I will review it.”

While Cademartori said the process has worked in the past, she said bigger projects such as the Lahey Health Hub building required architectural review. She said the new patios for Burton’s Grill and Bar and La Gallina Mediterranean Eatery and Bar should also be reviewed by Adams.

“I can handle looking at signage to make sure they are the right size and have the right dimensions,” said Cademartori. “But it’s getting tricky with art because is it a facade or is art?”

Planning Board member Ed Champy recently drove around the development to see all of the public art that MarketStreet has put on display. He said the “gap around art” in the design standards means the Planning Board has to “define it.”

Wilkins recalled that MarketStreet requested to place an orange modern art sculpture by The Apple Store, which the board objected to at a June meeting.

“It doesn’t fit in with the design standards,” said Wilkins.

“A modern sculpture in the middle of it is not part of the intent,” said Champy. “I almost threw up when I saw it.”

Wilkins said the animal sculptures located across from Starbucks and Otto Pizza reflect the North Shore’s history as well as the town’s wildlife. She recalled that the cows on display came from the old Hilltop Steakhouse while the frog and turtle sculptures located in the children’s playground area are tied to Reedy Meadow.

“It’s in the open gathering space that brings people together,” said Wilkins. “Kids can also climb on them, so it’s a recreational space.”

“Those tie into the traditional North Shore,” said Charville.

Planning Board member Amy MacNulty said the artwork displayed at MarketStreet should not only be in compliance with the design standards, but also “connected to the community.”

“There is so much richness around Essex County, the North Shore and Lynnfield that can be tied in,” said MacNulty.

“If it doesn’t, it’s not permitted,” said Wilkins.

“It’s hard enough for the abutters to deal with another restaurant going in,” said MacNulty. “To me, this feels like putting salt in a wound.”

In response to a question from Wilkins, Cademartori said the design standards prohibit sandwich boards from being placed around the development.

“They are not supposed to be there,” said Cademartori.

After the discussion, the Planning Board told Cademartori that art, building facades and outdoor seating changes has to comply with the design standards and will be subject to Planning Board review.

“There will be no further artwork going forward until the Planning Board reviews the art to see if it complies with the design standards,” said Cademartori in an interview with the Villager.

“We welcome and look forward to engaging with the town of Lynnfield on this discussion,” said Woods.