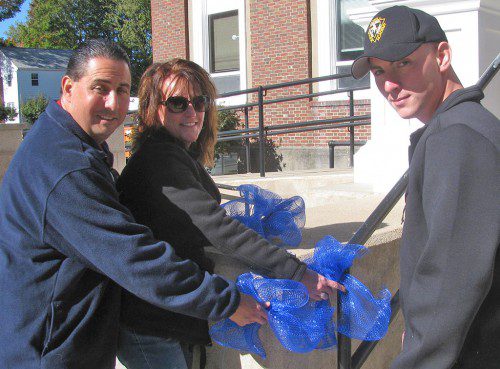 OFFICER DAVID MORALES, his wife Lois and son DJ hang blue ribbons on the railings at Town Hall on Sunday as part of the campaign to “cover the town in blue” to show support for law enforcement. DJ Morales recently completed his Police Academy training and will soon be joining the Wakefield Police Department. (Mark Sardella Photo)

WAKEFIELD — They are on a mission – and that mission is to show support for police officers and law enforcement everywhere.

On Sunday, that effort came to Wakefield. Dozens of people, including Wakefield Police officers, State Police officers, their spouses, family members and friends joined forces to “cover the town in blue” by placing blue ribbons on poles and trees in the downtown area and in Greenwood as a show of support for police.

They rallied on Veterans Memorial Common at noon on Sunday before heading out in groups with bags of blue ribbons to be hung prominently on poles and trees.

State Trooper Justin Peledge and his wife Courtney have helped spearhead the effort from the State Police side.

Trooper Peledge said that the effort arose after State Trooper Thomas Clardy was killed last March 16 on the Mass. Pike, leaving behind a wife and six children. Trooper Clardy died when a car crossed several lanes of the highway and slammed into Clardy’s cruiser at a high rate of speed. The driver of the car faces numerous charges, including operating under the influence of drugs after a quantity of marijuana and a partially smoked joint were found in the car.

After Trooper Clardy was killed, Peledge said, a group of State Police wives came together to form a support group.

“Within that group, they started the campaign ‘Cover the Commonwealth in Blue’ in light of recent incidents across the country of violence against police officers,” Peledge said.

Part of that effort is to put up blue ribbons to show support for law enforcement. They’re hoping to get as many cities and towns as possible in Massachusetts to participate.

Wakefield Police Chief Rick Smith was pleased to see a large contingent of his own officers and their families participating on Sunday.

“This year alone we’ve had over 200 incidents across the country of police officers being shot at,” Chief Smith said. Forty officers have died as a result of gun violence. The next largest killer of police officers is motor vehicle accidents like the one that killed Trooper Clardy, Smith added.

“We believe that 90 percent of the people in the country support us – it’s just a silent majority,” Smith said. “We’re just trying to get the word out.

“I applaud Justin and the State Police wives for putting this together,” Chief Smith Said. “The people of Wakefield hopefully will support all law enforcement, whether its federal, state, collegiate, municipal or tribal – it doesn’t matter.”