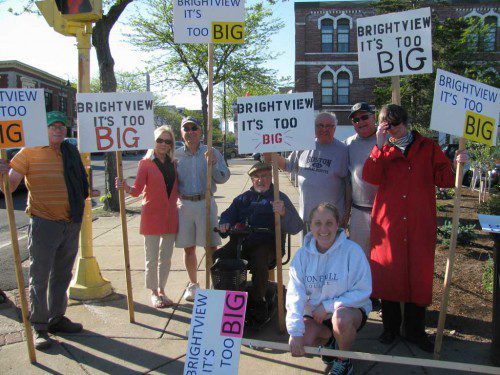 WAKEFIELD — About a dozen Brightview opponents held signs at the corner of Main and Water streets before marching to Town Hall to confront members of the Zoning Board of Appeals arriving for their 7 p.m. meeting.

The protesters are opposed to the 130-unit Brightview Senior Living facility that Shelter Development proposes to build on Crescent Street. The facility would include a mix of assisted-living, independent living and memory care units. The ZBA has been conducting hearings on the project application for the last six months.

The major concern that opponents have is the size of the proposed facility. They maintain that the 4.5 story structure is too big for the site and would have a negative impact on the neighborhood.

After a number of early hearings focused on the size of the building, Shelter agreed to make changes to the plans including removing sections of the top floor on the ends of the building to lessen the impact of the height in relation to abutting structures. The changes brought the number of units down from the originally proposed 137 to 130.

Opponents of the project have continued to raise the issue of size at virtually every hearing, even when ZBA hearings focused on other aspects of the proposal. When opponents again tried to discuss size at Zoning Board’s April 22 meeting, board members suggested that the issue of size had been sufficiently addressed and was no longer on the table.

Beginning at about 5:30 p.m. yesterday, a group of about 12 individuals stood at the corner of Main and Water streets holding handmade signs reading, “BRIGHTVIEW: IT’S TOO BIG.”

At 6:15 p.m., they began marching down the sidewalk on the east side of Main Street heading for Town Hall. They reassembled in front of Town Hall and chanted repeatedly, “It’s too big!” at ZBA members and others as they arrived for the meeting.

Things were decidedly less dramatic inside Town Hall once the hearing got underway, although one of the protesters did manage to address the size of the proposed Brightview facility.

“Crescent Street will be gone,” said Maureen Howland of Common Street, admitting that she had not attended previous hearings on the project. She said that she was “horrified” at the proposed building, which she characterized as a “monstrosity” that would “dwarf” even the buildings on Main Street.

Other opponents at the meeting attempted to get at the size of the project via other routes. Robert McLaughlin commented that some of the exterior design elements discussed last night were merely examples of “forced perspective” intended to make a large building seem smaller.

The report addressed the water and sewer system as well as storm water drainage on the site and made recommendations. Members of the board called the review “thorough.”

Attorney Brian McGrail, representing Shelter Development in its application to build the Brightview facility, said that his client was satisfied that the DPW’s recommendations were “consistent with what we can do.”

The ZBA also discussed gas and electric utilities with respect to the Brightview project. John Ogren of Hayes Engineering said that he had been meeting with personnel from the Wakefield Municipal Gas and Light Department. Ogren described how electrical service would be brought in from Crescent Street and gas service from Main Street.

The board also wrapped up some remaining architectural issues with Eric Anderson, the architect for the project.

McGrail told the ZBA that since the proposal has changed over six months of hearings, he would suggest that he send out a revised package to some of the other boards that have had input on the proposal.

ZBA member Chip Tarbell said that as the board’s review of the application “winds down,” it would be a good time to begin looking at a preliminary Order of Conditions for the project as well as a construction schedule.

The board continued the hearing to May 27.

In another continued hearing, the ZBA discussed proposed upgrades to the J.G. MacLellan Concrete Manufacturing site at 1 New Salem St. The proposed improvements to the way in which the concrete is manufactured as well as other measures are expected to significantly reduce noise and dust from the site.

The hearing was continued to June 6, when changes to the operations and maintenance plan will be discussed as well as lighting on the site and a construction schedule.

The board OK’d the relocation of two Dumpsters as well as some new signage for the Richmond Vista 40B apartment complex at 105-109 Hopkins St., with final details to be worked out.

The ZBA granted a variance to allow signs 2.7 feet wide and 2.25 feet tall in three of the windows at Gentle Dental, 409 Main St.

Granted zoning relief that will allow Francis Chase to construct an addition with a two-car garage to his home at 16 Cordis St.

Approved a variance that will allow Meghann Moses and Shawn Cerretani to build an addition on their 6 Adams St. home.

Continued to May 27 a hearing related to a proposal to build a canopy and add signage at Wakefield Gas, 454 Water St. 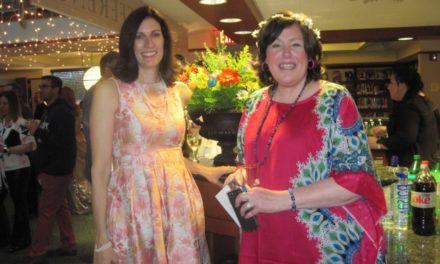 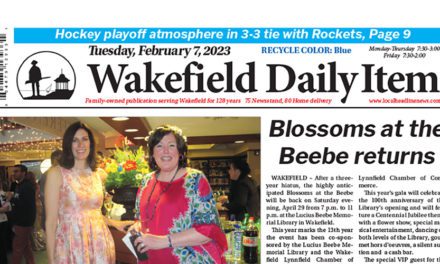