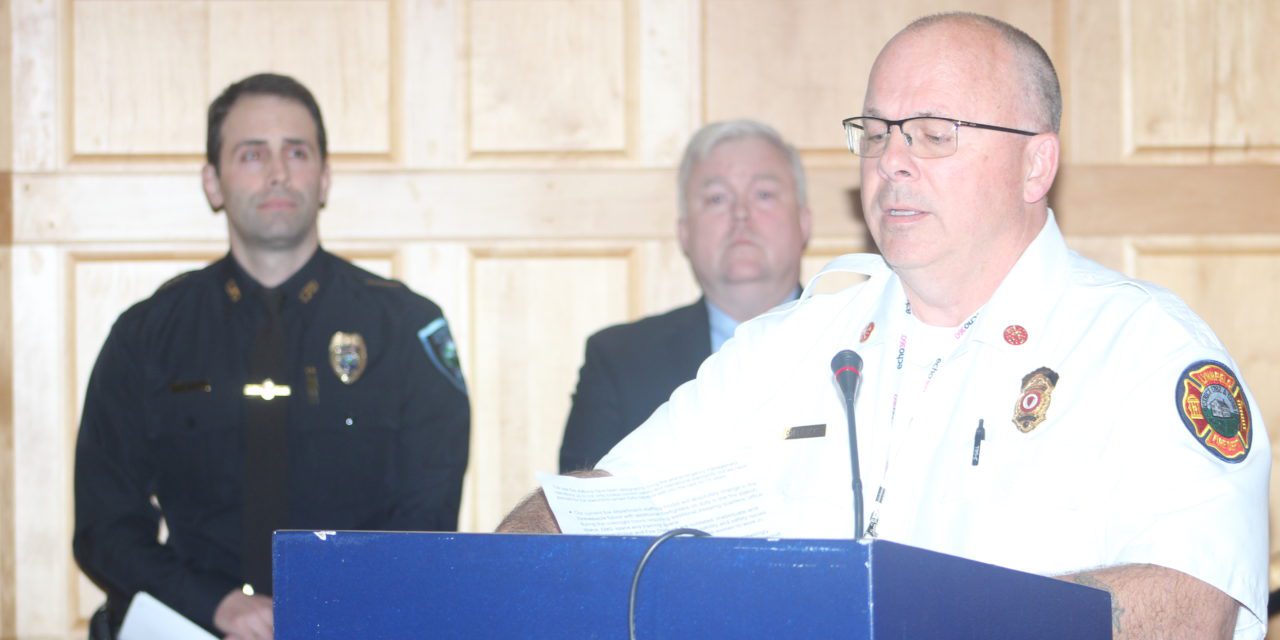 The Town Hall component of the project will make it compliant with the Americans with Disabilities Act (ADA). The Town Hall project includes installing an elevator and constructing a new meeting room for municipal boards and community groups to use.

“The project we present for your approval is the result of nearly a decade of planning,” said Select Board member Joe Connell. “These facilities are totally inadequate, and don’t protect the safety and health of our public safety employees. They also lack facilities for female workers. In addition, these stations and Town Hall do not provide proper ADA access and accommodations for the public. This is the most comprehensive and cost-effective way to protect the health and safety of our police officers, firefighters and town employees so they can continue to provide the outstanding service you rightfully expect.”

“The current configuration puts officers in danger,” said Secatore. “The layout is inequitable and the detention area is unsafe. Our officers are responsible for public safety, and they deserve a place of employment that allows for their safety as well as the safety of those taken into custody.”

Secatore recalled that police officers have to use a stairwell located next to the station’s garage to bring prisoners into the facility.

“We bring people taken into custody up a narrow, turning staircase and walk them into the center of the Police Station,” said Secatore. “This puts our officers at risk. We have no secure area to keep them until they are placed in a holding cell. If anyone is intoxicated or uncooperative, the officers are placed in a situation they should not be in. Not having secure processing is substandard and unacceptable for modern policing.”

“We need female police officers in Lynnfield, but how can we recruit women to come and work in a station with no separate facilities,” said Secatore. “It’s unacceptable for a community such as Lynnfield.”

Secatore said the Police Department has received 500 reports from victims of crimes this year. He said the station has no areas where victims can talk to police officers privately.

“The proposed station will provide a design that is consistent with our philosophy of community policing,” said Secatore. “It is focused on the needs for citizens and employees.”

Dolan gave an overview of the project’s $63.5 million cost. He said the construction component of the project costs $52 million, and the remaining $11.5 million is for “soft costs” that includes architectural and design services, new dispatch equipment for the stations, furniture, technology and temporary facilities.

“We know these are very difficult and unstable times,” said Dolan. “Historically, costs do not decrease. If we wait any longer, these costs are going to accelerate. It will never be cheaper than it is today.”

Dolan recalled that $33 million in debt from the school projects in the early 2000s as well as the Reedy Meadow Golf Course purchase will be expiring by the end of 2025. He said the tax impact will be based on $30.5 million instead of the full $63.5 million.

“In the most recent assessment, the average home value in the town of Lynnfield is $816,964,” said Dolan. “The average tax impact on each home would be $385 annually, or $32 per month. The vote tonight does not authorize any additional expenditure of money. It allows this process to move to a townwide vote on funding on Tuesday, Dec. 6. We understand these are difficult times, but we have a community problem that is not going to go away until it is addressed.”

Davis said both stations were “nothing more than garages and a place to park the fire trucks” when they were built in the early 1960s. He said 70 percent of the Fire Department’s current calls are for emergency medical services.

“Neither fire station has adequate space to store or clean our EMS supplies and equipment,” said Davis. “Contaminated turnout gear worn by our firefighters has been linked to a significant increased cancer risk. Cancer is the most dangerous threat to firefighter health and safety today. Firefighters have a 9 percent higher risk of being diagnosed with cancer, and a 14 percent higher risk of dying from cancer than the general U.S. population.”

“Neither station provides any separate space or private space of any kind for our female firefighters,” said Davis. “When these stations were built, there were no plans for firefighters to provide 24-hour service to the residents of Lynnfield. There are no gender equitable bathrooms, shower space or sleeping quarters at either fire station.”

Davis said the new fire stations will be designed “not only for today’s standards, but 50 to 75 years from now.”

“Our current Fire Department staffing model will absolutely change in the foreseeable future,” said Davis. “Having additional firefighters on duty overnight requires additional sleeping quarters, office space, EMS space and training space. Our current police and fire stations are outdated, inadequate and unfit for all members. They are fraught with liability and safety issues. I cannot continue to ask our dedicated men and women to work in these buildings. Recruitment and retention of firefighters is becoming increasingly more difficult. I am personally embarrassed to continue recruiting and trying to retain members due these existing conditions. There is no Plan B. We need to move this project forward.”

Former Selectman Bob MacKendrick recalled that he began his 42-year tenure working for the Fire Department in May 1961 when both stations were “several months old.”

“These buildings were obsolete before they were even built,” said MacKendrick. “Even then, they did not meet the standards from 1936. The architect who designed these stations never designed a fire station in his life. He took the measurements of the 1934 and 1936 fire trucks, and that is how he designed the doors and the floors. In fact, the captain at South Station pointed out that if it was built the way it was planned, the trucks wouldn’t fit in the station and the bumpers would be sticking out the doors. Over the years, the men and women serving in the Fire Department have done a great job trying to make these buildings as useful and usable as possible.”

MacKendrick said the public safety buildings project “is something that needed to be done many years ago.”

Fire Lt./Paramedic Chris Cavalieri said firefighters and police officers work in both professions because they are committed to helping the public.

“You are not going to see us ask for help very often,” said Cavalieri. “It’s not what we do. But tonight, we are asking for help because we truly need it.”

“It’s a necessity,” said Bogart. “It needs to be done, and it should have been done many years ago. I urge everyone at Town Meeting to support this project.”

Firefighter Lt./Paramedic Jeff Fiorentino noted that firefighters’ turnout gear is stored on the floor next to the apparatus in both stations.

“It was found that the exhaust was blowing all over the gear,” said Fiorentino. “We do have a piping system to try and mitigate that, but it’s not 100 percent. When our gear goes into a car fire or a house fire, it absorbs all of the carcinogens. We do have a means to try and wash the gear, but it’s not 100 percent. The gear never gets fully clean. After we put that gear back on the apparatus floor, it is off-gassing these carcinogens right into the stations. The new stations will have the gear go into a separate room so it doesn’t contaminate the rest of the station. We are doing our best to make our job safer from cancer, and this is something we need your help to fix.”

“We appreciate all of the residents for coming to Fall Town Meeting to support the health, safety and welfare of all police officers and firefighters,” said Davis in an interview with the Villager after Fall Town Meeting.

“We are very appreciative and very humbled to receive the support of the town,” said Secatore in an interview with the Villager.