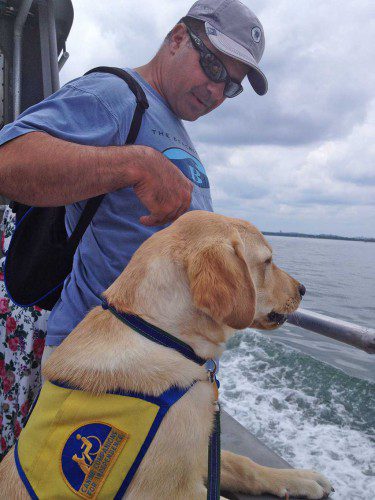 CANINE COMPANIONS FOR INDEPENDENCE puppy raiser John Maffeo is shown with Gary, a golden Labrador retriever mix, on a cruise around Boston Harbor. The organization is a non-profit dedicated to matching service dogs with the disabled. (Courtesy Photo)

MELROSE — A man and his dog. It’s hard to separate the two (often three, if a woman is involved). But sometimes it must happen for the good of all.

When John and Terri Maffeo, an Everett Street couple, saw their two children John Jr. and Melissa off to college, they looked around their empty nest and asked each other, “What now?”

Their child-rearing days behind them, the couple were still nurturers at heart. “Maybe we should adopt another dog,” suggested John.

Another dog? They already had 9-year-old Cosmo, a golden retriever. They would be crazy to invite another dog into their home. Or would they? Not if they provided a temporary home to a dog that would later become a service dog for a disabled child or adult.

John recalled the commitment of the many servicemen he encountered in Saudi Arabia and the United Arab Emirates when he was working as a Merchant Marine during Operation Desert Storm. He holds great admiration for anyone who serves and thought it would be thrilling to witness the positive outcome of a puppy raising experience.

“We considered ourselves blessed,” said John. “We had good health, good jobs. Our kids were doing well in school. We wanted to contribute to people less fortunate than ourselves in a meaningful way.”

Through research, the Maffeos found just what they were looking for: Canine Companions for Independence (CCI), a U.S. based non-profit organization that trains and provides assistance dogs for the disabled. Since May 2014, 4,400 dogs have undergone training with CCI. The organization looks for volunteer puppy raisers and provides training at their Long Island facility in Medford, N.Y.

The organization was founded in Santa Rosa, Calif. In 1975 by Bonnie Bergin as the first program of its kind. While teaching in Asia, she had seen burros being used by disabled people and thought that dogs could serve a similar role in the U.S. Since that time, CCI has become a national organization with five regions.

The disabled are paired with highly trained assistance dogs and are provided ongoing support at no cost to the recipient. All expenses for the dogs, including breeding, raising and training are paid for by private donations from separate foundations, corporations and individuals as well as fundraising projects hosted by other organizations such as Lions Club International.

After many conversations, John and Terri were sold on the idea of becoming volunteer puppy raisers and reached out to the organization. Soon after they were contacted, they filed an application, participated in a phone interview and were chosen as dog parents to Gary, an eight-week-old bundle of blonde fur. The couple picked up the golden Labrador retriever mix on Long Island on Feb. 24, 2014, and as soon as Gary walked through the front door of his new home in Melrose, he fit right in.

“He had a mellow temperament and was very easy going and got along well with Cosmo,” said John.

By then, John had retired from the Merchant Marine and now works as an engineer at Raytheon in Andover. Meanwhile, Terri was and still is a Realtor with the Bean Group in Winchester. Both companies allow service dogs on their premises, so the couple had permission to bring Gary to work a few days a week.

CCI encourages puppy trainers to expose assistance dogs to as many environments as possible, and to test the waters, the Maffeos also took Gary to the library, restaurants, grocery stores, banks and to visit his favorite sister Melissa at Trinity College. They met with success wherever they went.

“Most places were great, and when people in charge saw that Gary was wearing a vest that identified him as an assistance dog, they were very welcoming,” said John.

As puppy trainers over an 18-month period, the Maffeos were responsible for seeing that Gary was house trained. They also attended two-hour local obedience training classes on Saturday afternoons. In addition, they paid for all of his food and vet bills. According to Terri, the staff of Melrose Animal Clinic were Gary’s biggest fans and supporters.

For a year-and-a-half, the Maffeos lived a harmonious lifestyle. The dogs became “best buds.” But as the months passed, John and Terri knew they were getting closer to the time when they would have to say goodbye to the pup. The day for his assignment was looming, and though they would have to let go they were sad to see it happen.

“We raised Gary as if he were our pet,” said John. “Although we knew from the start that day would come, turn-in day was the worst.”

John said there were a lot of tears, and most came from his own eyes.

“We took him back to the regional training center in New York in August 2015 and went to a matriculation for pups going into advanced training,” John commented.

Following this, there was a graduation ceremony for dogs leaving advanced training and being placed with a person in need. John called the placement event “emotional,” but he and Terri got to witness the joy of the recipients.

After the ceremony, the Maffeos took Gary, who was matriculating, back to the advanced training facility on Long Island and spent another hour or so with him before handing off the leash to one of the trainers.

“We were warned that he would walk away wagging his tail and not look back,” said John. “And that’s exactly what he did, but we told ourselves that it was better than him going away barking and resisting.”

While reflecting on their experience raising a service dog, John said, “Some people give money away. We gave ourselves away. We were in a position to buy dog food and pay for vet bills, which can amount to about $2,000 a year.

“When you see people in wheel chairs and the true need they have, we consider ourselves blessed. On our way back from Long Island, we were fortunate to ride on the ferry with a man who was paralyzed from the waist down. He had just received a CCI service dog that was trained to pull him in a wheel chair.”

John added that it was gratifying to see the strong bond the man had already built with his new pup during the two-week team training.

“Both he and his wife were thankful for the increased independence that the service dog would provide them,” he said.

The Maffeos hope to welcome another service puppy into their home. “We’re hoping for a new ‘Gary’ by the end of the year,” he said.

Before their final goodbye to Gary, the Maffeos were given an opportunity to go back to Long Island and spend one more day with the pup before he was sent back to the West Coast for his final training and placement.

They jumped at the invitation.

“We were both glad that we did, but it was just as hard to say goodbye the second time, and once again most of the tears were mine. CCI is a great organization that benefits a great cause. I highly encourage puppy raising to anyone who wants to help a stranger in need and can commit the time and financial resources for between 16 and 18 months.

“Having Gary with us was an opportunity to experience the love and companionship of a pet without the lifelong commitment,” said John. “It was a great experience for us and we hope to raise another pup soon.”

John Bentzinger, public relations coordinator at CCI, said that puppy raisers like John and Terri Maffeo are really the backbones of his organization, and it couldn’t serve the disabled without them.

A few months after relinquishing Gary, CCI informed the Maffeos that Gary would be going into the Veterans Administration program for Post-Traumatic Stress Disorder (PTSD). Training is held in Santa Rosa, and because it is a confidential study, there will be no graduation.

“It isn’t easy for people like the Maffeos to give up a puppy, but when they see the tremendous difference the dog is making in the life of someone who really needs it, it makes it all worthwhile,” he said. “Many puppy raisers and graduate teams form lifelong bonds with regular communications and visits. Isn’t that a great lesson for a family?”

• Ownership of each dog is retained by CCI, and the dog must undergo yearly recertification.

• Labrador and golden retrievers are chosen for their intelligence, strength and devotion to service.

• Only about four out of 10 dogs actually make it through the training program. The ones that graduate are the cream of the crop.

• While in training, the dogs learn over 40 commands that are useful to a person with disabilities.

• Facility dogs also are available through CCI and serve at hospitals, rehabilitation centers and within the criminal justice system. Some dogs also are active with the Wounded Veterans program.