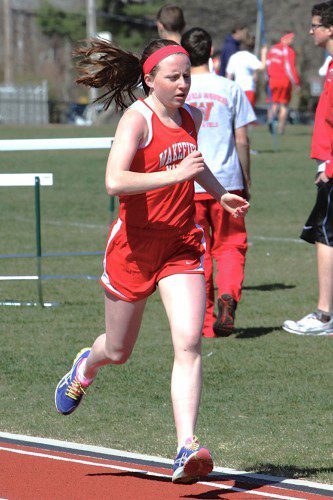 SHANNON QUIRK was crowned the Middlesex League champion in the two mile as she posted a winning time of 11:27.30 yesterday in the M.L. 12 Track and Field championship meet.
(Donna Larsson File Photo)

WELLESLEY — The Wakefield Memorial High girls’ track team crowned one champion and had several other place winners as it had a good showing at the Middlesex League 12 Track and Field Championship Meet which was held yesterday at Regis College.

Senior Shannon Quirk captured first in the two mile as she clocked in at 11:27.30 and beat out Woburn senior Katie Murray who timed in at 11:28.46.

In addition to Quirk, freshman Gillian Russell also ran the two mile and secured 10th place in a time of 12:56.44.

The Warriors claimed fourth place in the 4×400 relay as the Wakefield entry clocked in at 4:14.42. The four runners were sophomore Abby Harrington, senior Emily Hammond, senior Jill Raso and sophomore Cassie Lucci.

Sam Ross, a junior, captured fifth place in the triple jump with a distance of 33-6, while senior Nicole Galli placed 14th with a leap of 31-11.

In the javelin, junior Julia Derendal earned a sixth place finish with a heave of 97-4. Alex Rollins, a sophomore, also competed in the event and finished 11th with a throw of 86-10.

In the 100 meter dash, Wakefield had two entries with freshman Anna Lucas placing seventh overall at 13.68 seconds. Lucas qualified for the final with a time of 13.69 seconds. Also running the 100 was Ross who finished 13th in the preliminaries with a time of 14.00 seconds. Ross did not advance.

Junior Sara Custodio captured seventh place in the mile as she clocked in at 5:43.62. Jordan Stackhouse, a sophomore, also ran the mile and finished 10th in a time of 5:57.59.

Taking eighth place in the discus was Derendal who had a distance of 79-4. Rollins finished in 19th place with a throw of 65-4.

Wakefield placed eighth overall in the team scoring in the meet with 34 points.

The Warriors also had many other fine performances from their athletes who didn’t medal in the meet.

Avery Parece, a junior, and Galli  ran the 100 meter hurdles. Parece finished 10th at 17.58 seconds while Galli clocked in at 19.05 seconds. Neither made it to the finals.

Ross and freshman Hailey Lovell finished in 24th and 28th in the 200 meter dash preliminaries. They posted times of 28.57 seconds and 29.56 seconds.

Wakefield finished in ninth place in the 4×100 relay in a time of 54.82 seconds. The four runners included Purcell, Parece, Lucas and Ross.

Raso and Purcell finished in eighth and ninth place in the high jump as both cleared 4-8.

Wakefield has a makeup dual meet next Tuesday at 3:30 p.m. against Woburn at Woburn High School to wrap up the regular season. On Saturday, the Last Chance to Qualify Meet is being held at Notre Dame Academy in Hingham and Wakefield may have several athletes competing as they try to get into the Div. 3 state meet.