Raider hockey has playoffs on mind

After 2 more wins, Melrose could clinch tourney next week 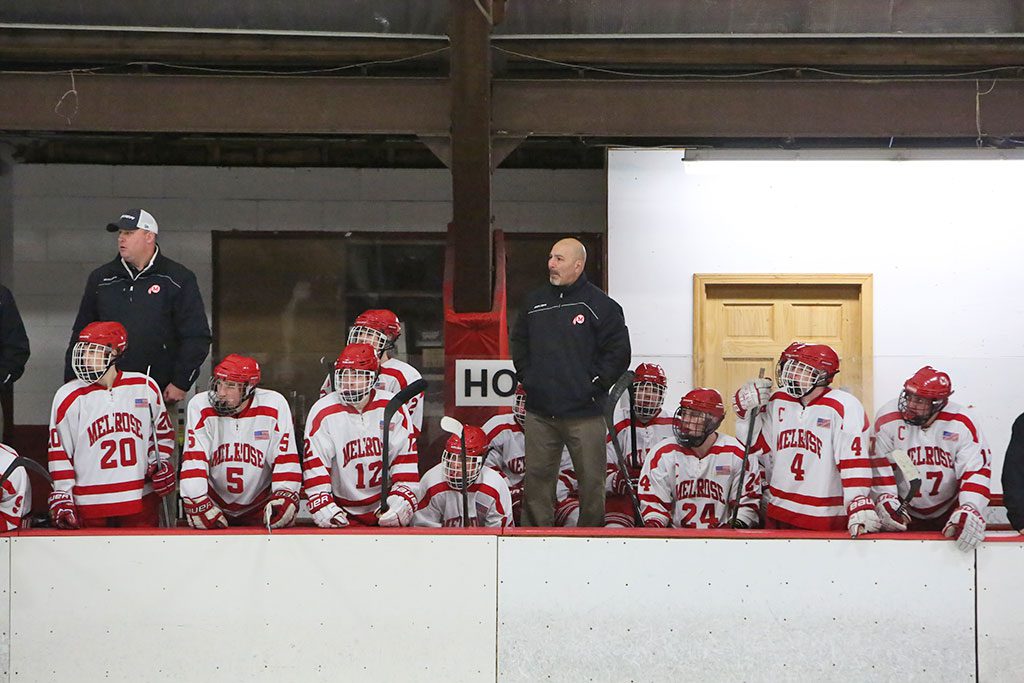 VIN MIRASOLO’S Red Raider hockey team has eight wins under their belt as they reach the half point of their season. (Donna Larsson photo)

MELROSE — The Melrose High Red Raider hockey team continues to gain victories and has amassed an 8-3-1 record after wins over Winchester and Lexington last week.

That type of balanced scoring is something that Melrose head coach Vin Mirasolo wants to see more. In terms of top offensive performances, their senior leaders are splitting duties on offense. Leading offense for the Raiders have been their senior captains Brian McLaughlin (9 goals, 19 points), Zac Mercer (8 goals, 19 points), Jack Hickey (9 goals, 17 points) and Karelas (12 points). With more Red Raiders contributing on offense this season, the better it is for the team.

“I’m happy to see both lines playing well and getting contributions in scoring,” says Mirasolo.

Most scoring comes from their mega-watt first line, consisting of his senior captains, all three-sport, All Star athletes. Shortly into the season Mirasolo realized exactly how strong his first line would be. “This line is a tough one and I’m not really sure there is a team who can handle them,” he says. “They’re just very physical, not exactly the most skilled per se, but so tough that there a lot of teams can’t keep up. This sets a tone and allows our other lines to adjust, we put out competitors back on their heels a bit and we strike from another angle.”

One improvement he has seen is his zone coverage. “I’m happy to see us working on our defensive zone coverage. The neutral zone is improving. That’s something we identified early in the season to work on and I’ve seen improvement over the last few games.”

Despite a 4-1 loss to Watertown on Jan. 14, Melrose has gotten pretty used to winning. The Raiders have earned 17 points toward playoffs with just 21 needed. They have 9 games left on the schedule. It’s safe to say, we will see the Raiders once again in the postseason. But again, anything can happen.

Despite Melrose’s impressive record and being close to the top of the Freedom league, Mirasolo feels its realistic to err on the side of caution in terms of projecting where this team may go. “You have to remember we lost 12 seniors and a lot of our defense and came back with, thankfully, Jake Karelas being the anchor. We’re making progress, I’m really enjoying the work of Ryan Feeney and Steve Guttadauro, they’re gelling. But this is something that we’ve had to built from the ground up in December. It’s a work in progress. We’re a work in progress.”

Two upcoming games could be an indication of how Melrose will do in the post season – if and when it gets there. This Saturday they host a bout with Reading, the current Div. 1 state champs. Right now the Rockets are a surprising 1-5-5 on the season. One person who is not putting much stock into that losing record is Mirasolo. “Look, Reading is a tough, tough team,” he says. “They have tremendous talent, they’re well coached. Look what they did last year, pulling off a state title after a losing start to the season. I completely disregard that record. They’re be tough for us.”

The Middlesex League, meanwhile, remains perhaps the most competitive public school league in the state, with Burlington, Arlington and Belmont circling the top 10 lists and vying for Super 8 contention. It remains to be seen whether Melrose will join that list or if they can follow the pattern of last year’s Reading team, who played their best hockey at the end of year, riding on momentum all the way to a state championship.

Says Mirasolo, “Our goal is to contend for the league and play at the point where we can compete for a state title, yes. The best way to get there is to play our best hockey at tournament time. Our destiny is in our hands.”