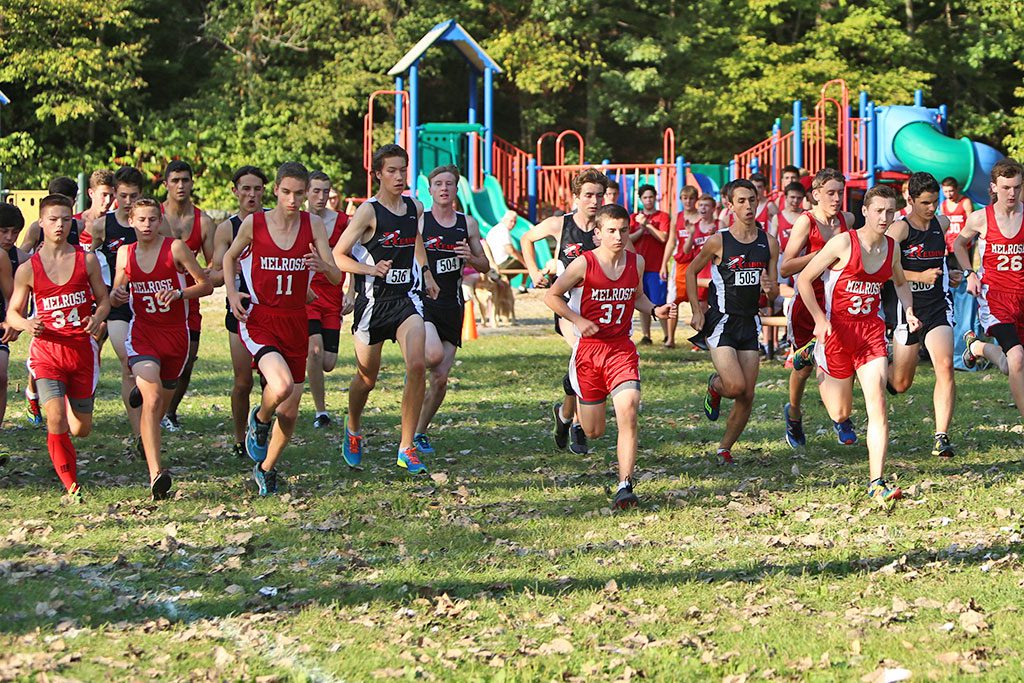 MELROSE — Success is nothing new for the reigning league champ Melrose boys’ cross-country team, who qualified for States the last two seasons and entered the 2015 season with a preseason rank of fourth among all Small schools in the entire state.

On Saturday, the team pulled off their most impressive feat to date: An entire sweep at the 2015 Big Wave Invitational in Lakeville. This first place varsity finish came after they rocketed past a contingent of runners, including a powerful Mansfield High, who earned 44 points to Melrose’s 42. Melrose swept the first three spots, and then some, to earn the win.

Melrose led up front with a band of brothers who kept pace ahead of all competition. Leading the top of the pack of the 2.5 mile race were current 2 mile state champ (track) Kevin Wheelock, who ran a blazing 13:01, Adam Cook was right behind him in 13:18 and Sean Conlan was third in 13:30. Melrose’s Robbie Hanlon piled it on for Melrose finishing sixth in 13:37.

By winning the Invitational, Melrose has their elbowed way into an elite category of cross country teams in the division and should be considered a team to beat in postseason races. It’s not every day that you see such wide-spread talent at the top, so it was something special for their longtime coach Kevin Allison.

“This performance was truly amazing as these boys are running just over 5 minutes per mile on a course in which one steep downhill brought the runners to a walk,” he said.

The Red Raiders’ victory was a true, collective effort. According to their coach, Melrose’s Griffin Barriss (32nd) was key also as he passed a few runners in the final half mile. “Without that we would have finished second,” he said.  Also running well in the junior-senior race was Ryan Hablitz, Ryan Bradford, Andrew Fox, Erik Heislein and Matt Cosman.

Melrose entered the Big Wave Invitational on the heels of an opening week victory against a tough Reading team, edging them 26-30 for a 1-0 start to the season. Kevin Wheelock led the way running the tough 2.9 mile home course in 16: 26, followed by Adam Cook who finished second in 16:51. The team hits the road to face Wilmington on Thursday (post deadline).