First round of D3N playoffs was all Melrose, 7-0 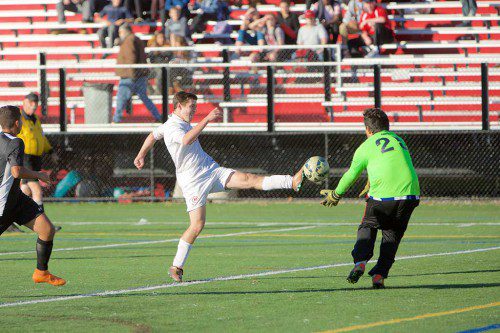 MELROSE — The Melrose High Red Raider soccer team advanced to quarterfinal play in the Div. 3 North playoffs on Friday, Nov. 4 at Fred Greed Field with a resounding 7-0 opening round, shutout victory against Greater Lawrence (6-11) which advanced them to play a tough Marblehead team on Sunday, Nov. 6.

It was a strong game all around for the Red Raiders. Melrose junior Shea Champagne scored a hat trick and goalie Jared Dowell earned another shutout for Melrose at the net. Red Raider defense, meanwhile, limited the Reggies to only two shots on net, their first being at the 21:00 mark. Melrose offense never relented on Greater Lawrence, scoring at the start of the whistle, just 30 seconds in thanks to a shot from Champagne that gave Melrose a 1-0 advantage.

Greater Lawrence contributed to two of Melrose goals, with accidental head shots into the net at points 2 and 4. Meanwhile, Melrose earned third score of the game when Owen Thorsteinsson shot an impressive goal on assists from Champagne and Joe Connolly. Melrose held a 4-0 lead just 10 minutes into the game and by halftime held a 6-0 lead thanks to goals from Mike Dreske (Sava Vlajkovic assist) and Champagne earned his hat trick with 9:00 left in the half, giving Melrose their last score of the game, 7-0.

Defensively, Melrose saw some impressive work from Nick Cordeau, who was forced to defend standout Pedro Lopez of the Reggies, a high scoring forward who saw limited ball time during the game. Thorsteinsson and Pete Wiesen, meanwhile, fended off several offensive plays to clear the ball away from scoring threats.