Raiders’ hoop back to winning ways 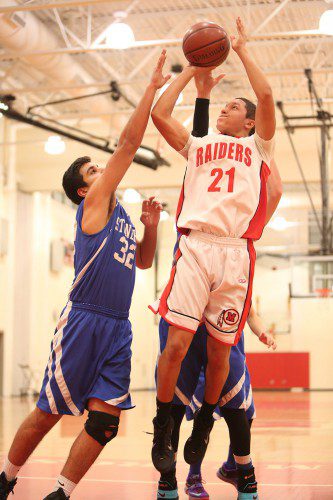 MELROSE — As the Melrose Red Raider basketball team reach the second half of its season, it has battled to second place in the Middlesex Freedom League with a winning record of 6-4, thanks to back-to-back wins against Lexington and Reading last week. On Jan. 19 the Raiders began its winning streak with a 68-58 win over Lexington at Melrose High. Three days later, it hosted the Reading and extinguished the Rockets, 63-43.

It was the perfect time for back to back wins for Melrose, who embark on a road stand this week. Up until now it’s been a matter of maintaining consistency (or trying) for Melrose, who’ve beaten opponents like the Minutemen and Rockets by double digits but fallen shy to beatable ones (a loss to Wakefield, 62-59) But when Melrose is firing on all cylinders, it’s very tough to beat. The Raiders had its first taste of Freedom League teams in the last few weeks and will be circling back for another crack at them, hoping to keep its spot among the top of the league. Amid its search for consistency there have been two steady constants: their leading scorers, seniors Anthony Gilardi and Colby Andrews. Gilardi is coming off a monster game against Reading, tallying 28 points and hitting for a double double. He also shot 20 points against Lexington in Melrose’s 61-45 victory. Gilardi, a transfer from Malden, has plenty of basketball experience behind him as a power forward and didn’t need much time to transition from a Golden Tornado into a Red Raider.

According to his coach, he has hit the ground running. “When Anthony came we asked him to do more, rather then being a one dimensional player, we’ve asked him to facilitate our offense, set up defense and rebound,” says head coach Mike Kasprzak. “And he’s done a great job of it, especially in the last three weeks. He has a big role on this team and is doing what we ask. I’m really proud of him.”

Teammate Colby Andrews, a senior captain of the squad, has lived up to expectations this season and then some. Andrews is averaging about 17 points a game but against opponents such as Reading, can be counted on anywhere from 20-25 ppg. “Colby is expanding his shooting range, hitting jump shots nicely,” says his coach. “There is always a big difference when he is on the bench for foul trouble and when he is playing. It’s often the difference between winning and losing, so he knows we expect him to limit avoidable mistakes. We need him out there at all times.”

Junior Julian Nyland has been one of most pleasant surprises for the Red Raider team. According to his coach Nyland can play like a game changer. “In some ways he is the most important guy on the floor. He plays both ends of the floor and, against Reading, his rebounding was probably the best all year.”

For Melrose to qualify for tournament and make a run, Melrose will need to stay healthy and keep hot hands. Melrose will rely on players like senior captains Will Caffey, Christian Pizzotti and sophomore Tamari Mercer to keep Melrose sharp and competitive. One area Melrose is seeing improvement in is the free throw line. They shot 18-24 against Reading and Kasprzak has been working on it at practice. Last Saturday the team had, what the coach describes, as a “really good practice” after its rout of Reading. “For this stretch of the season we’re working on taking care of the clock, limiting turnovers and avoidable fouls,” says the coach.

At this point in the season the Middlesex Freedom league is wide open. Melrose current sit in second place behind Watertown, who it will see again on Feb. 13.

“We’re playing pretty good ball right now,” says the coach. “We have eight games to go and get another crack at our league opponents in the next few weeks. We feel good.”