Red Raiders on the winning side of things 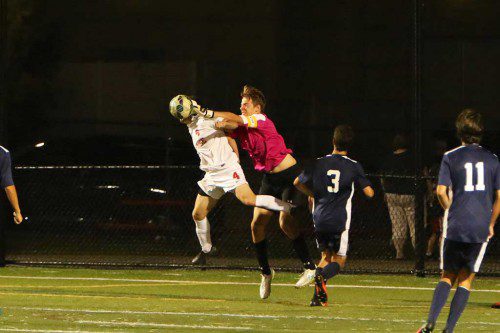 IT WAS a winning week for the Red Raider soccer team, who earned wins over Burlington and Watertown this week. (Donna Larsson photo)

MELROSE — The Melrose High School boys’ soccer team sit 3-0-1 in the Middlesex Freedom League after an unbeaten week of play, including two 1-0 shutout victories against Watertown and Burlington.

Their in over Burlington on Sept. 21 was of their most impressive games of the season against a Burlington team who only last year were of the best teams in the division with a record of 14-1-3. This year Melrose was prepared for the Red Devils and thanks to well timed goal by Joe Connolly and a shut out a the net by Jared Dowell, Melrose pulled off a key 1-0 victory and a clutch league win.

Connolly found the net in the first half on an assist by Shea Champagne. Melrose defense had the tough job of neutralizing Red Devil offense in the second half and Dowell held Burlington scoreless at the net. Says Melrose coach Dean Serino. “Jared played well with the shutout. He did everything we asked of him and just improves every game.”

Melrose defense, spearheaded by terrific efforts from Pete Wiesen and Nick Cordeau, helped remove any scoring threat. “Pete and Nick were great. Pat Donohue and Cam Howland did a great job too.”

Fueled by the win, Melrose fought to a 2-2 draw against Wakefield just two days later on the road at the Galvin Middle School in Wakefield. Melrose’s Shea Champagne put the Raiders up 1-0 in the opening minutes of the game (on a Joe Connolly assist) and in the second half Melrose’s Nick Cordeau found the net on an Owen Thorteinsson assist for an equalizer that made it a 2-2 game and eventual tie final.

Melrose also shot to a 0-0 tie against Malden on Saturday and saw a very strong effort by Mike Dreske. “Mike played really well, he’s the heart of the team and knows how to rally us,” says his coach. “It was a real team effort overall, we got a lot of people in the game.”

Melrose let the good times roll on Tuesday, Sept. 27 when they earned another win, a 1-0 road victory against Watertown, thanks to a goal by Pete Wiesen (fed by Stian Forsberg) and another shutout at the net by Dowell.

Compiling wins only helps Melrose’s effort to collect points toward tournament and as the coach notes, “It’s a long season.” As for the Freedom League competition? “To me it seems like anyone can beat anyone, whoever shows up to play to win,” says Serino.

While Melrose’s defense has been strong of late, the subtle difference in their offense has helped eliminate the one-point losses Melrose faced in 2015. “We have more scoring opportunities this season,” says the coach. “It’s not always easy but the difference has been subtle. We have great senior leadership and a strong junior class.”

For the Red Raiders it’s their drive and camaraderie that gives them a bit of an x-factor. “These guys have a passion for the game,” says Serino. “They don’t take a day off,or even a minute. Even when practice is over, they still stick around and take shots. Having that passion plus courage can help translate into wins.”

Melrose will continue league play this week when they play under the lights at Fred Green Field on Thursday (post deadline) and host Reading next Wednesday at 3:45 p.m.