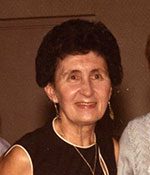 LYNN — Rita M. (Alexander) Wladkowski, 92, of Lynn, died Saturday, Sept. 3, at Life Care Center of the North Shore, following a brief illness.
She was wife of the late Edward J. Wladkowski, and the daughter of the late William and Laura (Carroll) Alexander.
Born and raised in Lynn, she was a graduate of St. Mary’s Girl’s High School, Class of 1942.
Rita began her career as a secretary for General Electric in Lynn and later as a sales clerk at Burrows and Sandborn Department Store. She later worked for American Mutual Insurance Company in Wakefield until her retirement.
She was a lifelong communicant of Sacred Heart Church in Lynn, where she was active with the Lady’s Sodality. She enjoyed volunteering at the gift shop at Lynn Hospital and was a member of the Ancient Order of Hibernians #10, Lynn and the Saugus Senior Walkers. Most important to Rita was the time she spent with her family.
She is survived by her three sons: William Wladkowski and his wife Marilyn of Wakefield, John Wladkowski and his wife Maureen of Nahant and Richard Wladkowski and his wife Janine of Lynn; her daughter Linda Soter and her husband William of Shelton, Conn.; 11 grandchildren: Richard, Mathew, Mark, David, Nathan and Joshua Wladkowski, Will, Alex and Melanie Soter, Jessica Reid and Amy Henson and eight great-grandchildren; her four sisters: Josephine Hardy and her husband John of Lynn, Ann Horgan of Pepperell, Shirley DeRoche and her husband William of Wakefield and Aurea Horgan of Salem, as well as her brother-in-law Henry Wladkowski of Boxford. She was the sister of the late Joseph Alexander.
The family wishes to recognize and thank the staff at Life Care Center in Lynn for their kindness and professionalism in keeping Rita comfortable, safe and happy these past few years.
Her funeral will be held in the Solimine Funeral Home, 426 Broadway (Route 129), Lynn on Thursday at 10 a.m.
Interment will be in St. Mary Cemetery, Lynn. Relatives and friends are respectfully invited. Visiting hours will be Wednesday from 4-8 p.m.
Directions and guest book at www.solimine.com.