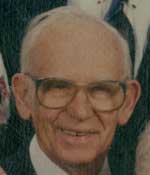 WAKEFIELD — Robert H. Given, 98, a Wakefield resident for the past 60 years, peacefully passed away Tuesday, June 30, at the Lahey Clinic in Burlington surrounded by his loving family.

Born in his family home in Burlington on July 28, 1916, he was the son of the late John and Martha Given.

Mr. Given was raised on the Given Brothers Farm in Burlington until the age of 8 and then moved to Woburn where he graduated from Woburn High School. He was a self-employed horticulturalist in Woburn where he owned five greenhouses and grew cucumbers and tomatoes for the United States government during World War II.

He later switched to chrysanthemums and was known as the “Chrysanthemum King of New England,” due to his expertise and commitment to his trade.

Mr. Given was a 65-year member of the Masons Mount Horeb Lodge in Woburn, where he proudly served as a sponsor to his youngest grandson, Andrew. He was a member of the Woburn Rotary Club and the First Parish Congregational Church of Wakefield where he had served as a Deacon alongside his late wife, Harriett, with whom he shared 50 years of marriage.

During his retirement years, Mr. Given enjoyed vacationing with Harriett and family in the Lakes Region of New Hampshire and in Palm Beach, Fla.

Mr. Given was the husband of the late Harriett (Esty) Given. He was the father of Leeila Given of Wakefield, Nancy Sleger and her husband Mark of Wakefield and Robert Given Jr. and his wife Jane of Reading. He was the brother of Ruth Greenleaf of Woburn and the late Eleanor Snelling, John Given and Evelyn Benson. He was the grandfather of Shelby, Jeffrey and Andrew Sleger. He is also survived by his many nieces, nephews, grand-nieces and grand-nephews.