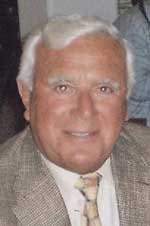 He was born on July 28, 1935 in Boston to Joseph and Santina (Sciaba) Levaggi. He had one brother, Anthony, who predeceased him. Ronald attended elementary school in Medford and then graduated from Newman Preparatory School in Boston in 1952. He received his engineering degree from Wentworth Institute in Boston in 1956.

After graduation Ronald worked for Boston construction and development firms for six years before starting his own company, Ronal and Co., in 1962. He married JoAnn Ferrino of Winthrop in 1962, and had three daughters, Lisa, Lori and Lesli.

Ronal and Co. became Ronal Realty as Ronald acquired small shopping centers in the greater Boston area over the next 35 years. He reluctantly retired in December 2015.

He will be much missed by family, friends and business associates.

Family and friends may visit at the Dello Russo Funeral Home, 306, Main St., Medford on Tuesday, Dec. 27 from 4–8 p.m. and again on Wednesday morning, Dec. 28 at 10:30 followed by a funeral Mass celebrated at St. Joseph Church, 118 High St., Medford at 11:30 a.m. Services will conclude with burial at Wildwood Cemetery, Winchester.

In lieu of flowers, memorials may be made in Ronald’s name to Avow Hospice, 1095 Whippoorwill Lane, Naples FL 34105 or to the hospice of one’s choice.

To leave a message of condolence please visit www.dellorusso.net.