Lived many years in North Reading 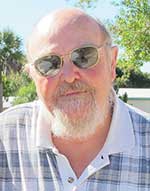 LADY LAKE, Fla. — Roscoe (Rocky) Croswell, 75, died on May 8, 2016 in Lady Lake, Fla. He was ill for the last few years, but he fought a good fight to the end. He resided in the Villages, Fla. Formerly of North Andover and Norway, Maine. Rocky lived in North Reading the first half of his life. He attended school in North Reading.

He worked at South Elementary School in Andover, before that at the Quincy Shipyard. He was a member of the Moose Lodge in North Reading for many years. He especially enjoyed playing golf, snowmobiling and playing cards. Rocky was a kind, loving person, always ready to help anyone. He enjoyed people and having fun.

Born in Lowell, Mass. on March 18, 1941, he was the son of the late Willis and Thelma (Birkmaier) Croswell. He was also predeceased by his brother Willis (Sonny) Croswell Jr. and wives, Jean (Campbell) and Anita (Parisi).

Services will be private and are under the direction of the Croswell Funeral Home, 19 Bow St., North Reading. In lieu of flowers memorial donations may be made in his memory to the charity of one’s choice.