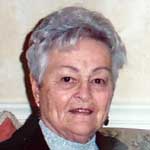 NORTH ANDOVER — Rose M. (DelRossi) Palladino, 86, of North Andover, formerly of Lynnfield and Stoneham, died June 16, 2015.
She was the daughter of the late Antonio and Julia (Benedetto) DelRossi of Wakefield. She was the devoted wife of the late William J. Palladino, and the cherished mother of Linda Infurna and her husband Philip of Naples, Fla., William C. Palladino and his wife Karen of Shapleigh, Maine and Jay Palladino and his wife Donna of Lynnfield.
Rose is survived by her sister Francis Arsenault. Six other of her siblings predeceased are Michael DelRossi, Anthony DelRossi, Richard DelRossi, Nicholas DelRossi, Victoria Knight and Dominica Beaudoin. Rose is also survived by her eight grandchildren,Melissa Infurna, Philip (PJ) Infurna, William Palladino, Chris Palladino, Jared Palladino, Joel Palladino, Brett Palladino and Jade Palladino. She is also survived by seven great-grandchildren.
Rose was an impeccable homemaker and was selflessly dedicated to her husband and family. She enjoyed wintering at her home in Marco Island, Fla.. She was an avid tennis player in years past and regularly enjoyed doubles play with husband Bill and friends. Always active well into her later years, she enjoyed morning walks, a game of bocce and her garden.
A funeral will be held from the McDonald Funeral Home, 19 Yale Avenue, Wakefield on Tuesday, June 23 at 9 a.m. followed by a funeral Mass in St. Patrick Church, 71 Central St., Stoneham at 10 a.m. Interment will follow at Woodlawn Cemetery, 302 Elm St., Everett. Calling hours will be held at the funeral home on Monday, June 22 from 4 to 8 p.m.