Resident of town for 54 years 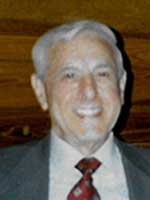 NORTH READING — Santo J. Terranova – 89, of North Reading and formerly of Watertown, died at the Brentwood Rehabilitation and Nursing Center in Danvers on Wednesday May 25, 2016.

Born in South Boston, on August 17, 1926, he was the son of the late Giovanni and Guiseppina (D’Arrigo) Terranova. Santo was a graduate of South Boston High School. He worked for the Singer Sewing Machine Company in Somerville, as a Sewing Machinist for many years.

He has been a resident of North Reading for the past 54 years and was a member of St. Theresa’s Church and the Knights of Columbus. He enjoyed spending time with family, relatives, friends and neighbors. He was a master handyman and could fix anything that people called upon him to do. He was a devoted husband and father. On Halloween he would dress up as a clown and hand out candy to kids in the hospitals. He especially enjoyed golfing.

His funeral was held from the Croswell Funeral Home, 19 Bow Street, North Reading, on Wednesday , June 1 at 9:15 a.m.,, followed by a 10:30 a.m. funeral Mass at St. Theresa’s Church, 63 Winter Street (Rt.62), North Reading.  Burial was in Riverside Cemetery, North Reading. In lieu of flowers memorial donations may be made in his memory to: Alzheimer’s Association, 480 Pleasant St., Watertown, MA 02472 www.alz.org www.croswellfuneralhome.com