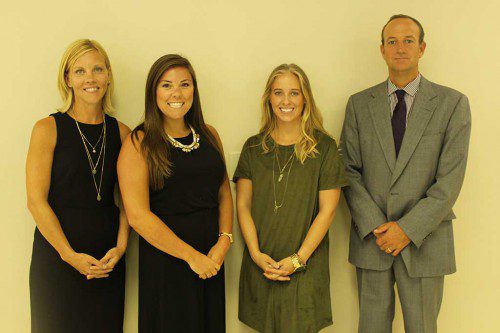 “You will never work harder than you will for Lynnfield Public Schools but you never be more rewarded,” said Tremblay.

“It’s a privilege to work here but it requires a lot of work and it has a lot of rewards at the end of the day,” said Cyr.

Coughlin said the mentoring program is designed to help new teachers improve their teaching practices as well as familiarize the teachers with the school district.

“It’s not easy to be here your first year and we want to help you out,” said Coughlin. “We want to make the year fruitful and enjoyable for you.”

Rundell-Gjerde said the program will cover a variety of issues such as special education topics and working with parents.

The school department is welcoming two new administrators this year.

The elementary schools are welcoming 10 new teachers this year.

Kerin Bakst is a new preschool teacher at the Summer Street School. She worked as a kindergarten teacher at the Dolbeare Elementary School in Wakefield from September 2004–March 2009. She was an inclusion kindergarten teacher at Dolbeare Elementary School from September 2001–June 2004. She served on the Dolbeare School Council from 2005–07. Bakst received her master’s degree in education from Lesley University in June 2004. She received her bachelor of arts in psychology and early childhood education from UMass–Amherst in May 2000.

Marisa Cappadonna is a new special education teacher at Summer Street. She previously worked as a student support instructor and did her student teaching at the Fiske Elementary School in Lexington. She worked as an autism service provider at Northeast Arc in Danvers from November 2011–July 2013. She also worked as a recreation therapist for Spaulding Rehabilitation Hospital in Boston from December 2011–February 2015. She received her master of science degree in education and special education, moderate disabilities, from Bay Path University in June.

Kristin Hager is a new first grade teacher at the Summer Street School. She served as a long–term third grade substitute at the Huckleberry Hill School last spring. She was a first grade paraprofessional at the Summer Street from September 2015–April 2016. She was an ABA paraprofessional at Huckleberry Hill from 2013–14. She earned her master’s of education degree from Merrimack College in June 2015.

Emily Babon is a speech and language therapist at Summer Street. She worked at McKay Arts Academy in Fitchburg beginning in August 2015. She worked at the UMass clinic in Amherst from Sept. 2013–May 2014. She earned her degrees from UMass–Amherst.

Beth Gasinowski is a new part–time physical education teacher at the Summer Street School. She worked as a physical education teacher at the Cashman Elementary School in Amesbury from September 2002–June 2003. She did her student teaching at Huckleberry Hill from February–May 2002. She was a child care provider at the Boston North Fitness Center in Danvers from March 2006–March 2016.

Emily Schelzi will be a long–term substitute beginning in either late September or early October. She did her student teaching at the Summer Street last spring, where she worked in a second grade classroom. She worked as a substitute teacher for the school system from April 2015–June 2016. She was a daycare teacher at The Island Child Care Center in Portsmouth, R.I. from 2010–2011. She earned her master’s degree in early childhood education from Merrimack College in May.

Nicole Hyde–Bradford is a new special education teacher at Huckleberry Hill. She was a special education teacher in an ABA pre–kindergarten program in the Marblehead Public Schools from the fall of 2015 through this past spring. She worked in an integrated pre–kindergarten program for the Marblehead school system in the summer of 2015. She was an ABA tutor in Marblehead from the fall of 2014 through spring of 2015.

The high school is welcoming one new teacher in addition to Bates.