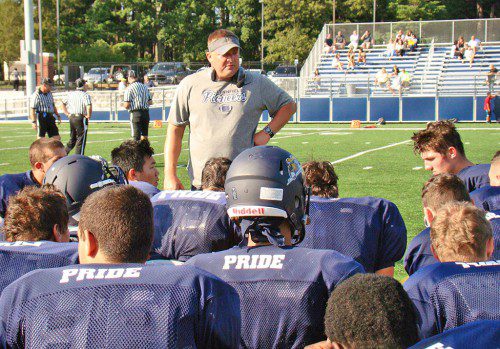 HEAD COACH Neal Weidman addresses the troops at halftime of the recent Northeast scrimmage. With a 54-man varsity roster, the Pioneers have the depth to continue the team’s winning tradition under Weidman. (Tom Condardo Photo)

LYNNFIELD — Anyone who’s ever played King of the Mountain knows how hard it is to get to the top. They also know staying there is even tougher.

After taking over the Lynnfield football program in 2008, head coach Neal Weidman suffered through a 3–8 inaugural campaign. In 2009, the Pioneers reached the mountaintop by capturing their first league championship in 24 seasons.

After that rough first season, Weidman and the Pioneers have enjoyed an impressive run of success, posting a 53–16 record – including an 11–1 campaign last year – winning four league championships, capturing a division title and making a trip to the Super Bowl. 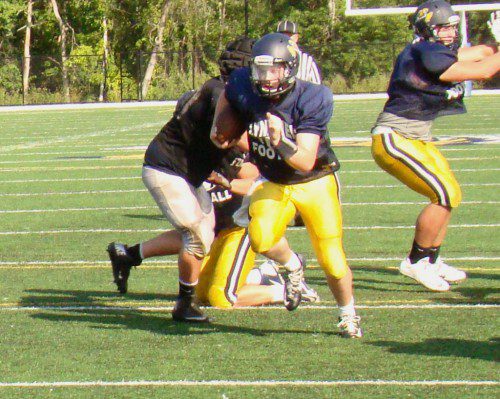 SENIOR QUARTERBACK Jake McHugh heads for the end zone on a 16–yard touchdown run in the preseason scrimmage against Northeast Metro Tech. He earned the position after an impressive preseason performance in three scrimmages. (Tom Condardo Photo)

Weidman’s overall 56–24 record gives him the highest winning percentage of any coach in LHS history. Despite losing significant senior classes each year, the Pioneers’ success has continued unabated.

“Honestly we’ve been really lucky to have a ton of good kids,” said Weidman when asked for the key to sustaining a successful program. “Not just good football players but good kids in general. They’ve started out as freshmen and you’re not sure what you have but because they’re coachable and willing to listen and work at it they end up being good players by the time they’re seniors. As long as we keep getting kids like that we’ll have a chance.”

As Weidman heads into his eighth season he’ll again be relying on a big senior class to defend their three–time league crown and Division 4 North championship. Of the squad’s 22 starters, 19 will be seniors. The 54–man varsity roster includes 20 seniors, 13 juniors and 21 sophomores.

“It’s a senior game,” Weidman said. “We’ve always played a lot of seniors and this year is no different. Each group of seniors wants to leave their mark. That’s a positive thing.”

The Pioneers have been impressive in their scrimmages against D3 Masconomet and Salem and D5 Northeast, scoring 16 touchdowns while allowing only two.

Offensively, the high-powered Pioneer spread attack remains in place but an entirely new cast will man the skill positions. Gone from the attack that scored 400 points last year – the second most ever in LHS history – are potent weapons like quarterback Danny Sullivan (63 percent passing and 21 touchdowns) and his speedy receivers Cam Rondeau and Jon Knee. That pair caught 61 of the team’s 84 passes last season and accounted for 17 of their 21 passing TDs. Also graduated is Jake Rourke, who ran for 961 yards and 15 touchdowns last year. 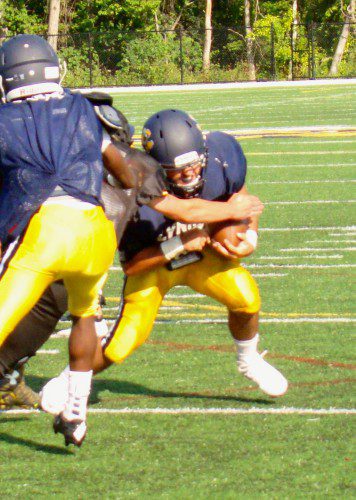 SENIOR Alex Soden breaks loose for a long run against Northeast. He will see action in the backfield on this year’s squad, which includes 20 seniors. (Tom Condardo Photo)

His primary target in the scrimmages has been junior Louis Ellis, a 6’3”, 200–pounder who gives the Pioneers a different look at receiver.

“Cam and Johnny got most of the balls last year but we’re going to be much more balanced across the fourth, fifth, sixth and seventh receivers this year,” said Weidman.

Captain Drew McCarthy will be the primary running back. At 5’9”, 165, he doesn’t have the size of recent Pioneer bulldozers like Kyle McGah and Rourke but with his lightning-like speed, he only needs a small crack of daylight to break free. He ran for 495 yards and six TDs last season, averaging 8.8 yards per carry. Senior Alex Soden will also see action in the backfield.

The Pioneers’ defense lost anchor linebacker and CAL Baker Player of the Year David Adams to graduation but, based on the scrimmages, they appear poised to be stingy once again. They allowed only one touchdown each to Masconomet and Salem and shut out Northeast.

DeGeorge, Balian, Caswell and Rothwell make up the stout interior defensive line. Battaglia and senior Max Robert are the outside linebackers and Finn, Balestrieri and Soden are the inside backers.

Bronshvayg, who was 47 for 49 on PATs, will be back doing the placekicking. His 47 extra points set a single–season Pioneer record. Finn and sophomore Cooper Marengi will handle the punting.

“It’s too early,” Weidman responded when asked to make a prediction for the Pioneers this year. “I don’t know where we stand but my hope is that we’ll be playing meaningful games late in the season.”

The Pioneers host CAL Kinney Division Newburyport to kick off the season Friday night. The Clippers struggled last season, going 1–3 in the league and 4–6 overall.

The Pioneers whitewashed the Clippers last year, snapping a 13–game losing streak at World War Memorial Stadium dating back to 1986. Overall, the Clippers have been the toughest CAL foe for the Pioneers, dominating the series 32–10. Lynnfield has done better in the Weidman era, going 3–4 since 2008.

The Clippers graduated 12 seniors including the dangerous passing combination of Mike Shay to Jonathan Bajko. They’re a young team with only 10 seniors but they have 23 juniors who should bolster that group. Newburyport has switched to a wing T offense this year giving them a different look.