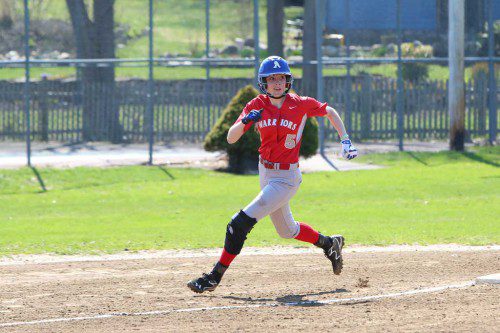 WAKEFIELD — The last thing the Wakefield Memorial High softball team wanted was a one and done performance in the state tournament.

But that’s exactly what happened as the Warriors saw their season come to an end yesterday when they fell to the visitors from Swampscott by an 8-7 score in a Div. 2 North first round game at Vets’ Field.

“You know what really stinks? You lose one game and all of a sudden it’s done. We’ve been together since March … March! Here it is June and in one game it’s over. They had tremendous heart. (We have) the youngest team in the Middlesex League (and) we have a great future ahead of us,” noted Wakefield coach Rick “Coach Q.” Quattrocchi.

Swampscott got on the scoreboard first with a run in their first at bat. Hannah Leahy led off with a single and then Sam Rizzo dropped a single just over third base. Christina King reached on an error to load the bases. Kasey Kennedy grounded out to Wakefield pitcher Amanda Boulter who threw home for the force out on Leahy. Rikki Rocklin singled to left to score Rizzo to make it 1-0 before Boulter got the next two outs.

Wakefield managed to tie the game in the bottom of the inning. Meghan Burnett led off with a single off the glove of third baseman Rizzo. After a strikeout, Emma Kraus singled and both runners advanced on a passed ball. Another strikeout followed and then Nicole Gasdia singled in Burnett and a ground ball ended the inning.

The Big Blue responded with another run in the top of the second. Olivia Cooke led off and reached on an error and was sacrificed over by Riley Lord. She scored on a single by Leahy to make it 2-1. A single followed but a fly to left ended the frame.

Wakefield took its first lead in the bottom of the second. Hayley Kaddaras had a leadoff single down the right field line and moved to second on a sacrifice bunt by Vanessa Kaddaras. Mia Romano ran for Hayley Kaddaras. Nicole Catino walked, as did Burnett to load the bases for Boulter, who also drew a walk to force in Romano to tie the game at 2-2. After a strikeout, Alexi Truesdale singled in Catino to put Wakefield up 3-2.

Swampscott stormed back with five runs in the top of the third.

Rocklin led off with a walk and, after an infield pop up, Alana Burke doubled to right-center. Cooke popped up to third with Kraus making a nice diving catch in foul territory for the second out. Lord singled in Rocklin and then stole second. Rizzo then tripled to center to bring in Lord and Leahy. Truesdale came in to replace Boutler on the mound and gave up a single to King that scored Rizzo to put Swampscott up 7-3 before a ground ball ended the half inning.

The Warriors scored a run in the bottom of the third but it looked like they were going to score more.

Hannah Dziadyk led off with a walk and then Hayley Kaddaras followed with an infield single. Vanessa Kaddaras singled to load the bases. After a strikeout, Burnett singled in Dziadyk. Boulter then hit a ball to left the left fielder Burke who took a circuitous route under the ball. “Coach Q.” believing Burke wouldn’t catch the ball sent the runners. Unfortunately, Burke was able to make the catch on the run and then get the ball back into second for a double play that ended the inning.

“I thought the ball was over her head. I messed that one up. It wasn’t their fault. I take the blame for that. I’ve got to learn, too,” Quattrocchi admitted.

Wakefield scratched out another run in its half of the fourth. Kraus led off with a triple and scored on a sacrifice fly by Truesdale to make it 7-5.

The home team managed to tie the game up at 7-7 in the bottom of the sixth inning. Kraus led off with a single and then stole second. After a pop up to first, Gasdia tripled to center to bring in Kraus. Dziadyk grounded to third baseman Rizzo who tried to throw home to get Gasdia, but her throw hit Gasdia’s helmet and rolled away, allowing Gasdia to score and tie the game at 7-7. A ground out and liner to the pitcher ended the inning.

Swampscott plated what turned out to the game-winning run in the top of the seventh, though. Cooke drew a one-out walk and then stole second on a strikeout by the batter for the second out. Leahy drove in the go-ahead run with a single to left.

“I thought my four seniors were absolutely fantastic the whole year. There were no cliques and none of that stuff. They helped the underclassmen the whole time and that’s what you’re looking for. We have a bright future. We were the seventh best team in Div. 2 (North) with seven underclassmen. I’ll take that,” said “Coach Q.”

Wakefield finished the season with a 14-7 overall record, while 10th-seeded Swampscott (14-9) will take on Marblehead in the quarterfinals tomorrow at 4 p.m. at Marblehead.

Boutler, Gasdia, Hayley Kaddaras and Kraus were the four seniors who played in their final game for the Warriors.