“A man of forever friends” 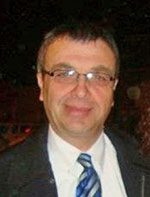 NORTH READING — Steven O. Arsenis, 57, of North Reading, died Feb. 22 in Lahey Hospital in Burlington after cardiac complications. He was the husband of Darlene J. Strickland-Arsenis, with whom he shared nearly 25 years of marriage. Born in Athens, Greece, he was the son of Soula (Tassopoulos) Arsenis of Lynn and Othon Arsenis and his wife Eleanor of Saugus. He was raised in Lynn and had lived in Medford before moving to North Reading 14 years ago.

Steven worked as a service manager for New England Copy Specialists in Woburn for the past 25 years. He enjoyed playing and coaching basketball and was involved in the Harry Agganis Basketball Tournament. He has been described as a man of forever friends.

In addition to his wife and parents, he is survived by three beloved children; Alexis, age 20, Nicholas, age 18, and Cassandra, age 16; all of North Reading. He was the brother of the late John Arsenis.