Warriors posted most wins in a single season with 13 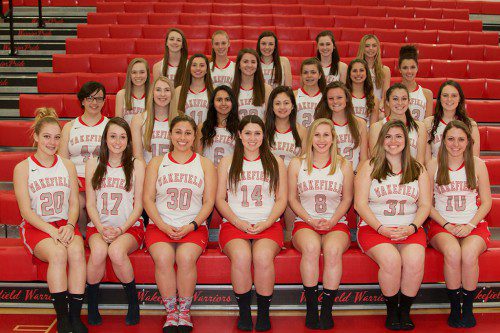 WAKEFIELD — Success was plentiful for the Wakefield Memorial High School on the lacrosse field in 2016. The varsity girls’ squad had the most wins in a season (13) and five members of the team were named Middlesex League All Stars.

Last Friday the team held its end of season banquet, where Head Coach Cara Luca recapped the season and some of the fun moments they had as a team. Brianna Smith, Taylor Messina and Kelsey Czarnota were named captains for the 2017 team. After the banquet, Luca shared her thoughts on the season.

“The banquet was bittersweet,” she said. “We are losing 14 seniors who each hold a special place in my heart and in the program. They have not only improved WMHS lacrosse but they were mentors to the youth program.

“This was a great lacrosse season,” added Luca. “As a program we grew.”

She noted that this year the program added a freshman team after 17 freshmen showed up to tryouts.

“Thanks to Debbie Tremblay’s hard work at the youth level, we had 17 freshmen try out,” Luca said and the Warriors brought Amanda Sheehan in to coach them. Meg O’Connell coached the Junior Varsity squad.

The coach reminisced about some of the best moments of the season saying, “The best win we had this season was vs. Lexington. We played a hard fought game and the game ended up in overtime (which was new this season). We played one overtime and scored. It was the best feeling to see these girls come together and get a victory especially against the Liberty Division.”

When asked why the team has seen such steady growth in recent years coach Luca said, “The girls trained hard in the off season. They played at New England Twisters or Homegrown. They worked together as a team. They would help each other on the field. This year’s team had a strong bond and I think that played a huge part.”

It was a season full of exciting games and big wins.

In the first game they blew out Gloucester (15-3) before dropping a nail-biter to Reading in game two (8-7).

Following the loss to Reading the Warriors responded with five straight wins, each time by a huge margin. They won three straight games on the road at Revere (17-3), Malden (16-1) and Stoneham (20-6) before returning home to pummel Malden once again (16-0) and take out Wilmington (13-5) to close out April with a 6-1 record.

May didn’t get off to an ideal start with a home loss to Winchester (16-8). However a couple days later and the Warriors would set out on the road for two games in two days, starting with a rainy trip to Lynnfield. There the Warriors pulled out a dramatic late win (9-8). The next day they were back on the road and found themselves in another tight contest with Belmont. Wakefield got the upper hand and was able to come back home with another win (15-12) to improve to their record to 8-2 on the year.

The next time out was a rematch with Revere and the results were the same as Wakefield came out on top (19-7). The win set up a huge matchup with Woburn on the road, unfortunately the Warriors three-game winning streak came to a halt as the Tanners prevailed (8-5).

Following the Woburn game, the Warriors knew there was no time to dwell on it as in two days’ time rival Melrose was coming to town. In another exciting game, the Warriors successfully defended their home turf and took down Melrose (13-10).

The aforementioned game against Lexington followed the Melrose win, with the Warriors pulling out an overtime victory (14-13). With four games left on the schedule the Warriors record stood at 11-3. The Warriors  faced their truest and most ferocious test in the final four games.

The last four regular season game started out well enough with the Warriors taking care of business on the road at Burlington, notching their 12th win in impressive fashion (15-4).

The next game saw the Warriors embark on the road once again their next time out, this time a long trip to Watertown. The Warriors nearly pulled off a big win, but ultimately they went home empty-handed as they lost the game (11-10).

“Watertown was the strongest team in the Middlesex League,” Luca noted. “And to only lose by one while they were destroying their opponents was big. The girls persevered during that game and I was proud of them.”

A rematch with Lynnfield under better conditions followed the Watertown loss, and this time the Pioneers were no match for the Warriors with Wakefield taking the win by a 10 goal margin (13-3).

The final game of the regular season showed an ominous omen as the Warriors lost on the road to Arlington (14-6). This gave them a final regular season record of 13-5 but the loss probably affected their tournament seeding and they drew a road game with Danvers in the first round of the Div. 1 North Tournament.

The success ended abruptly for the Warriors as they fell out of the tournament following a first round defeat to the Falcons (18-6).

In the end the feelings were all positive from coach Luca.

“We worked hard to get to where we are at. Twenty girls came to practice every day and dedicated themselves to improve each day. These girls have so much more confidence in the way they play and the way they persevered this year, it was amazing. I was proud to be their coach.”