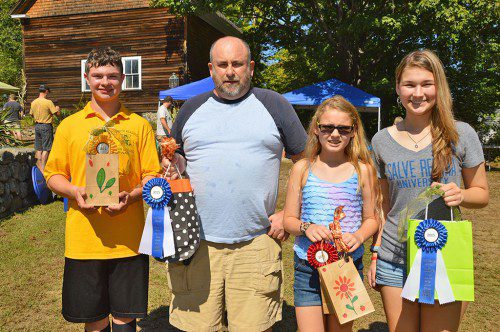 NORTH READING – An unusually warm and sunny September Saturday only added to the enjoyment of hundreds of visitors at the North Reading Apple Festival on the grounds of the Putnam House last weekend. For the 21st consecutive year, Bow Street and all of North Reading Center came alive with the Historical Society’s patented recipe of fun, food, entertainment and easy-to-take history lessons all concentrated on the grounds of the Daniel Putnam House.

Before, during and after experiencing the fun of pony rides, arts and crafts shopping and hot dogs and hamburgers served hot off the grill, fair goers of all ages had the chance to explore the historic buildings on the Putnam House grounds, including the 1680 Sgt. George Flint House, the 1845 West Village School House, the Putnam House itself as well as the Damon Tavern next door, which was open for tours. At the Farm Museum, visitors had the chance to inspect a wide selection of antique farm equipment that played such an important role in North Reading’s agricultural heritage from the 1800s until after World War II.

Inside the West Village School House were displayed the works of about dozen local artists and photographers who donated their works for the festival’s silent auction and raffle.

But the event is known as the Apple Festival for a reason, and at noon came the highly anticipated announcement of the winners of the annual Apple Pie Baking Contest selected by this year’s trio of hard working judges, Deb Brophy, Rudee Atlas and Nick O’Brien, with delicious results.

In the youth category, the first prize ribbon went to high school senior Katie Wall and the second place ribbon was won by her younger sister Abby and Kayla Imbriano. Third place went to Hugo Wiberg.

The annual event is the signature fundraiser of the North Reading Historical Society and attracts enthusiastic crowds every year, from the very young who took advantage of the pony rides across the street and played games on the Putnam House lawn to seniors who enjoyed the day’s entertainment. There were plenty of booths on the grounds for browsing as well – everything from the Historical Society selling a varied selection of gifts with historical themes to informational booths from the Friends of the Library and the Friends of Harold Parker State Forest, which will celebrate its 100th anniversary next year.

Entertainment was performed throughout the day, starting with the North Reading High School band, which opened the festivities at 10 a.m.

Afterward, there were live performances every half hour from the North Reading Senior Echoes, NRHS junior Valerie Stebbins accompanied by Eric Brown on the guitar, Austin Prep senior Lena Syed, the North Reading School of Ballet, vocals by Brenna Barry, a seventh grader at the North Reading Middle School, music from the Aldersgate Methodist Church Praise Band, a performance from the East Coast Dance Center and a demonstration by Master Shin’s Martial Arts School.

A highlight of every year’s Apple Festival is the raffle and silent auction winners of art created and donated by local residents.

This year’s art raffle winners were:

• “Fall” watercolor by Joanne Goodwin, donated by the owner, won by Bernice Grey.

• “No. 2 The Dancing Orchid Series,” photograph by Nancy Stewart, won by Susan Monahan.

• “Remember me,” photograph by Meg Robertson, won by Dan Pulver.

This was a very successful Apple Festival as the weather cooperated beyond the organizers’ wildest dreams, encouraging the crowds to come out and enjoy the small town atmosphere. To say the day was enjoyed by all would be an understatement. To say people are already looking forward to the 22nd annual Apple Festival would be a statement of fact.