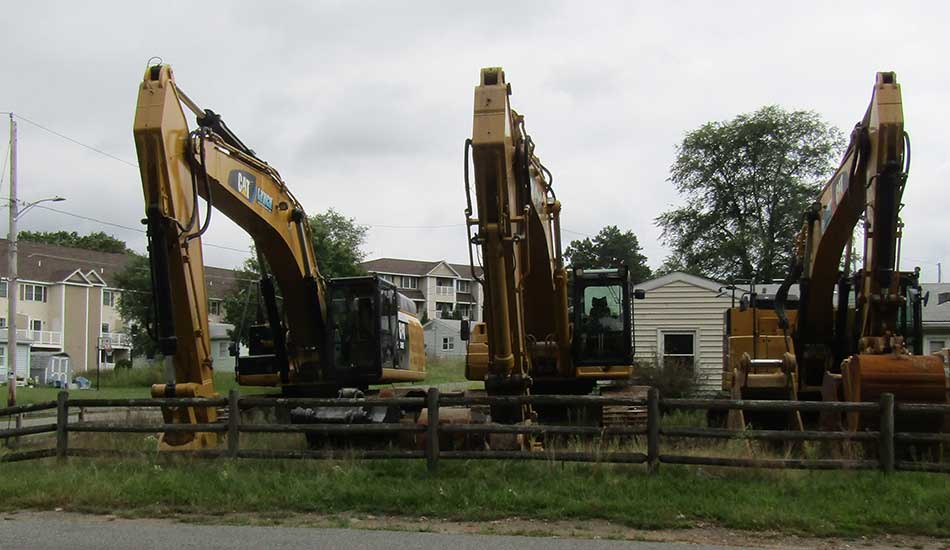 EQUIPMENT PARKED at Tarrant Lane appears to signal that the days may be numbered for the 12 vacant single family homes on the street. Developer Anthony Bonacorso plans to construct a 173-unit 40B affordable housing development on the site. (Mark Sardella Photo)

With heavy equipment parked on the site, all indications are that demolition of the 12 single-family homes on Tarrant Lane is imminent.

In October of 2019, just before COVID struck, the Zoning Board of appeals granted developer Anthony Bonacorso the necessary relief to construct a 173-unit, 40B affordable housing complex consisting of three residential buildings, plus a clubhouse, on the 3.4 acre site.

The original plan was to build 190 units in three five-story buildings, but over the course of nearly a full year of hearings in front of the ZBA, the development was scaled back and redesigned.

The development will be built on property off Hopkins Street in Wakefield near the Reading line that was acquired by the federal government in 1954. In the 1950s and early 1960s, the site served as the control site for a NIKE missile installation located in Reading, where the Burbank Ice Skating arena is now.

Project NIKE was a line-of-sight anti-aircraft missile system developed during the Cold war by Bell Laboratories for defense against attack by long-range Soviet jet bombers. NIKE bases were widely deployed along the east coast and around the United States.

The Tarrant Lane site was later taken over by the Coast Guard to house the families of enlisted personnel in 12 cookie-cutter single-family homes.

In 2017, Bonacorso purchased the land from the federal government for $3.6 million.

When the site was first put up for auction by the federal government’s General Services Administration, some residents were pushing the town of Wakefield to reclaim the property for use as recreational fields or a community garden.

But the town determined that the topography of the land made it unsuitable for recreational fields. In addition, the federal government had made it clear to town officials that they would be looking to get top dollar value from the sale of the land. The high price tag, plus the logistics of getting two-thirds Town Meeting approval within the bidding timeline made the town’s acquisition of the land impractical.

Following demolition of the existing structures, months of excavation are expected to take place before any construction begins on the site. The entire process is expected to take about three years before the new buildings are ready for occupancy.