Already 2-1 after upset over Belmont 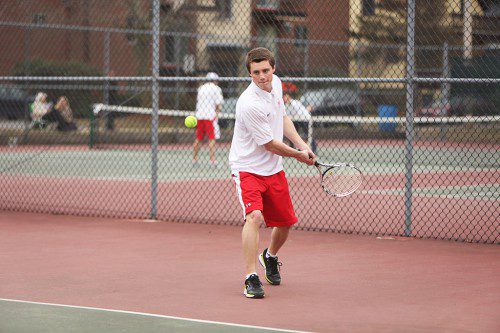 SENIOR QUAD captain Rowan Dempster is among those who return for the league champ Melrose Red Raider tennis team, who are already off to a 2-1 record. (file photo)

MELROSE — What happens when a team earns a league title, advances to playoffs and graduates no seniors at the end of their season? Continue the winning.

The Melrose High School Red Raider tennis team has that winning recipe this season and have quickly put together a competitive spring campaign while other teams are struggling to secure field time amid melting snow.

At 2-1 the Red Raiders have already dispatched Middlesex Large rival Belmont in what their coach described as “a great and historic win,” It’s perhaps the first ever for Melrose, who took down the Marauders in sets of 4-1.

“I’m not sure if its the first time Melrose has ever beaten Belmont but it’s the first time we have since I’ve been coach, which has been a while,” said a proud head coach Matt Williams, who has brought the Raiders to playoffs five years straight.

On the court, junior Julian Nyland returns this season in the number 1 singles spot, and the talented racketman is expected to be tough to beat among the most fierce competitors in the Middlesex League.

Senior Rowan Dempster is a returning captain who will see time in the second singles spot and will joined in quad-captains duties with Liam Brown, Brian Canzanello and Joe Hughes.

Melrose graduated no seniors last year so that means every face who returns is a league winner who has seen it all, including playoffs. As a result the Raiders are ready to pick up where they left off.

“One of our goals this year was to beat Belmont, we knew we could do it and it was mission accomplished on Monday,” said their coach. Melrose traveled to Marauder territory on April 6 and beat them 4-1.

Melrose’s first doubles team of Liam Brown and Joe Hughes played incredibly well, according to their coach. “Our first doubles teams did outstanding. I wasn’t expecting to see them play as strongly as they did but they really bounced back from their last outing for the win.”

Melrose’s second doubles team of Brian Canzanello and Sam Stallings took a win, along with Dempster in second singles and Jack Mays in third singles. Expect Raider Joe Connolly to find himself in the mix of competition as well.

Following a 5-0 loss against Winchester on April 1 Melrose enjoyed a 4-1 victory over Lynnfield on April 2, giving them their first winning streak during what’s sure to be an exciting season.

No strangers to playoffs, Melrose’s goal is to compete for the league title again and return back to post season. “Last season we were 9-1 in the league, it was unbelievable and we’re hoping to do it all again,” says Williams. “We need to focus on adjusting to the elements and finding consistency. Beating an upper division was a great way to start and we plan to do more of it.”

Fans can see them up close when they return to the Crystal Street courts in Melrose to host Stoneham on Monday at 3:45 p.m. in a key league game.