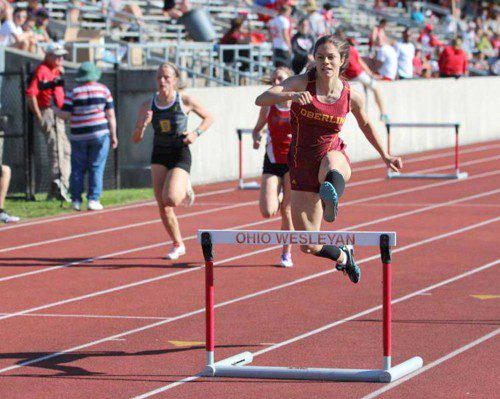 LILAH DRAFTS JOHNSON became an All American in the 400 meter hurdles as a member of the Oberlin College track team at the 2016 NCAC Outdoor Track and Field Championships.

The Oberlin College track and field runner earned the first All-America honor of her career by finishing seventh in the finals of the women’s 400-meter hurdles at the 2016 NCAC Outdoor Track and Field Championships on May 28 in Waverly, Iowa.

“It was the perfect way to end the season,” says Drafts-Johnson, a 2014 MHS grad, in a recent interview. “Running is a very difficult sport and it takes up valuable time from studying or working. Getting that recognition really validated all of the hard work I’ve put into this year and motivates me to keep going.”

Drafts-Johnson was a four year letterman and captain of both the MHS indoor and outdoor track teams and a 2 year letterman in MHS cross country. While competing in indoor and outdoor track, there was quite simply no event she didn’t perform in, whether it was competing a heptathlon, relay leg, 1 or 2 mile race, 55 dash or tossing a shot put or javelin. “I started out as a distance runner, which is pretty funny to my college coaches now,” said Drafts-Johnson. “The two mile will always have a special place in my heart because I used to run it with my sister.”

But Drafts-Johnson really excelled in the 400 hurdles and triple jump, earning a state bronze medal in the latter. She advanced to All States in the triple jump in 2014, her senior year, wowing with a six place finish. “The triple jump was actually my favorite event in high school,” she recalls. “I got to compete with my teammate Annalisa Debari every day and we were great training partners, always pushing each other and supporting each other at meets.”

Says her former MHS coach Trevor Rudolph, “She’s not just All American in sports, but in life. She’s a better person than an athlete. For us she did it all. When we didn’t have a two miler, she stepped in. She was a selfless athlete who did outstanding in the 400 hurdles, triple jump and two mile, three of the toughest events for any athlete to compete in. It was an honor to coach her and I couldn’t be more proud.”

Drafts-Johnson has competed for Oberlin for the last two seasons, with a focus on hurdles. After qualifying into the finals on May 23, Drafts-Johnson stepped into the blocks with her sights set on becoming an All-American. She completed the one-lap challenge in 1:02.86 to capture the career milestone, this despite earlier injuries in the fall.

Drafts-Johnson is the fourth member of the Oberlin class of 2018 to qualify for either the Indoor or Outdoor National Championships. She is the second Melrose High All American female track college athlete, joining former teammate Olivia Downey in that honor, who earned it last year for Merrimack College.

Drafts-Johnson qualified for the NCAA meet in a thrilling fashion. At the Great Lakes Elite Meet, she finished ahead of the field in the challenging 400-meter hurdles in 1:01.62 to reset her own school record and elevate her into the top-10 in the country and into the NCAA Championships. She entered the field in Iowa with the eighth fastest time. “It was probably one of the best races in my life,” she recalls. “Preliminaries can be very stressful and nerve-wracking. I tried to calm down as much as possible. I actually called my friend Katarina Frazier, one of my co-captains and teammates at MHS, and she chatted with me to help me relax before the race.”

Earlier in the season the sophomore broke her own school record in the 400-meter hurdles and moved into the top-10 in the country at the Great Lakes Elite Meet hosted by Ohio Wesleyan. Drafts-Johnson hustled to a first place finish in the one-lap challenge in a time of 1:01.62, beating out Wooster’s Hilary Coady and resetting the program record. She set the previous mark of 1:02.82 nearly a year ago at the North Central Final Qualifier. Her mark of 1:01.62 currently stands as the ninth-best mark in the country.

Overall, the experience has been a remarkable one for the speedy Melrosian. “I’m lucky to have had fantastic teammates who have gone with me both years to Nationals. They made the experience a lot of fun.”

Drafts-Johnson, daughter of Brian Johnson and Darby Drafts of Melrose, and sister to April, 22, and Adam, 13, is as successful off the track as on. She is a double major in Politics and Latin American Studies and is working this summer on a small citywide campaign in San Francisco through the fellowship Cole Scholar Program. In the fall she will study abroad in Santiago, Chile. She has not ruled out post-graduate travels abroad in Latin America where she may teach or research.

But next stop is another crack at the track. Drafts-Johnson will serve as team captain next season for Oberlin. “I have my eyes on a few records that I want to break. For the 400m hurdles, I’m hoping to dip below the 1-minute mark, and as my coach and I have discussed, there’s only one thing left to accomplish after you’re named All-American – and that’s to win the whole thing.”

With her track record, no doubt that’s something this speedy runner can pull off.