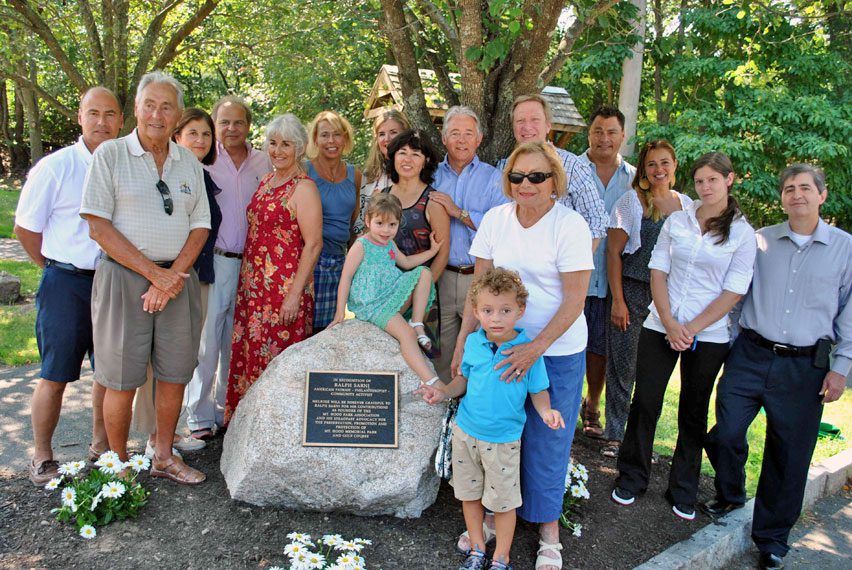 ON SATURDAY, SEPTEMBER 6, a ceremony was held at the Mt. Hood Park and Golf Course for the dedication of a memorial plaque honoring the late Ralph Sarni. Here are some of those who attended.

MELROSE — On Saturday, a bronze plaque recently installed at Mount Hood Memorial Park was formally dedicated by city and state officials at a ceremony honoring the contributions of Ralph Sarni, founder and president of Mt. Hood Park Association.

Among other officials who spoke on their fond memories of working with Ralph on community issues, Mr. Dittmer noted the following contributions he made to his beloved Mount Hood Park and community:

“Ralph was a patriot having served as a Marine officer during World War II in the Pacific theater. He settled here with his wife, Lorna, had their family here, and lived here for about 60 years.

He was also a philanthropist donating his time and money to his church and favorite charities, participating in fundraising for them, and providing leadership to many non-profit organizations. Giving back to his community was the hallmark of his character and his philosophy of life.

It is well known that over the past 40 years, Ralph has played a pivotal part in saving Mount Hood Memorial Park and Golf Course from destruction and development. The first instance occurred in the early 1970’s when the city planned to build the new high school at Mount Hood. As a community activist he rallied successfully to defeat the building of the high school at Mount Hood and this activity lead directly to the founding of the Mt. Hood Park Association, an organization under his leadership, dedicated to the protection, preservation and promotion of the park and golf course.

The second instance in which he played a major part in saving the park occurred in the 1980’s when the park and golf course was in a stage of deterioration due to cutbacks in funding, and reduced state and city funding. As president of the Association, he convinced city departments and the Massachusetts Golf Association to form a partnership which led to the leasing of the golf and park activities to an independent golf management organization. This innovative and creative idea has led to improved leasing agreements over the years which have made the park and golf course self-sustaining and has even been a revenue generating operation for the city to fund other important green space improvements throughout the city.”

The plaque, located on a stone near the entrance to the park reads as follows:

Melrose will be forever grateful to Ralph Sarni for his contributions as founder of the Mt. Hood Park Association and his steadfast advocacy for the preservation, promotion, and protection of Mt. Hood Memorial Park and Golf Course

Besides the above plaque, the outside terrace at the clubhouse was dedicated, “The Sarni Terrace”. After the dedication ceremonies, all family and guests joined together for a reception and luncheon in the clubhouse.