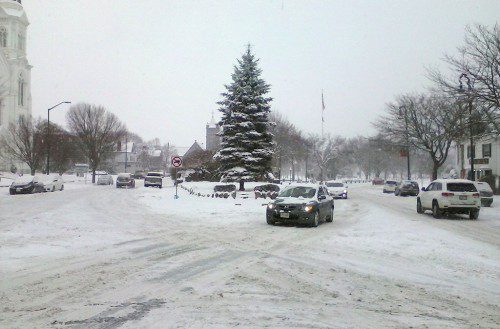 THE FIRST significant snow storm of the winter made driving hazardous but it also created a pretty winter scene with the town Christmas tree as the centerpiece. (Mark Sardella Photo)

According to DPW Director Richard Stinson, crews went out ahead of the storm very early Saturday morning. Streets were pre-treated beginning around 1 a.m.; snow began falling very lightly around 2:30 a.m.

The season’s first plowing operation began at 7:30 a.m., with the town using about 25 of its own pieces of equipment and contracting out another 40 pieces.

“There were no major issues that I’ve heard of,” Stinson said this morning before his Monday morning meeting with other DPW department heads. “There were no major breakdowns and we didn’t have to go out at all Sunday because the snow melted and the streets dried up pretty well.”

The full plowing operation — the first of the winter of 2016-17 — was finished around 6 p.m. Saturday. Crews were back Saturday around 10 p.m. to clean up the Square and take care of Main Street from the head of Lake Quannapowitt to the Melrose line.

“You can’t plow the Square effectively during the day,” Stinson explained, “especially with all the cars that park in the area. So we like to clean it up at night.”

Stinson also said the DPW “had to scramble a bit” on Saturday because there were events scheduled at several of the town’s schools. “We cleared up the schools earlier than we normally would,” he continued.

The local response to the storm was the fifth time the DPW has been out so far in the winter storm season of 2016-17; the four prior responses were to treat roads due to the threat of black ice.

Temperatures warmed and snow turned to rain in some places Saturday afternoon. But the weather service warned of treacherous black ice conditions after sunset.

Highway police reported numerous spin-outs and crashes, including tractor-trailers rolling over on Interstate 495 in Southborough. No serious injuries were reported.

—
The Associated Press contributed to this report.