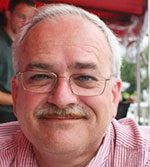 MELROSE — Thomas E. Durney, 58, passed away at Melrose-Wakefield Hospital on June 15 after a courageous battle with cancer.

Tom was one of 11 children and was born in Melrose on November 21, 1956. He was raised in Melrose, graduated from Melrose High School, Class of 1974, and from Suffolk University with a degree in Political Science.

Mr. Durney worked in the software industry for over 25 years as a CFO/COO and most recently had worked for the Serality Software Company. A lifelong resident of Melrose, Tom enjoyed cooking, debating and meeting with friends.

Mr. Durney traveled extensively for his job, enjoyed going to Sydney, Tokyo and Holland as well as the other 20 countries he visited. Over a 40 year span, Tom traveled around the world way too many times to even count. He also loved traveling to Deer Isle in Maine the last 20 years.

Interment at Wyoming Cemetery in Melrose.

In lieu of flowers memorial contributions may be made in Tom’s memory to the Caron Treatment Centers, P.O. Box 150, Wernersville, PA 19565 or @ www.caron.org or to the Jimmy Fund, 10 Brookline Pl, West 6th Floor, Brookline, MA 02445 or @ www.jimmyfund.org.